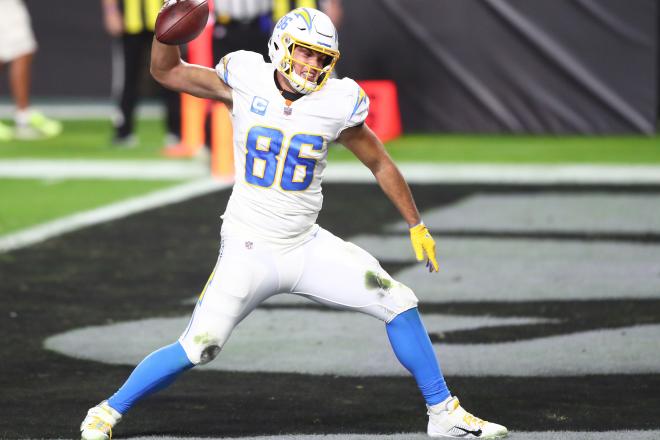 NFL Free Agency: Which Teams Have Taken a Step Forward - Or a Step Back?

With the free agent frenzy largely over, it's time to take a look at which teams have taken a step forward, and which have seemingly taken a step back.

At least on paper, the Pats look to be a much improved team.

On offense, they addressed shortcomings at the receiver position by signing Nelson Agholor and Kendrick Bourne - and then inked tight ends Hunter Henry and Jonnu Smith to significantly bolster that position.

Their defense also got better after the signings of linebackers Matt Judon and Kyle van Noy, along with hard-hitting ILB Raekwon McMillan.

Will these signings translate positively to the field? We'll have to wait to find out. That applies especially to Cam Newton, who's a huge question mark heading into the 2021 season.

Los Angeles Chargers. Yes the Chargers lost a few players, but they filled the holes with key signings, especially on offense.

Look for the Chargers to win more of those close games this year as Herbert matures, enjoying better protection to find open receivers. The Chargers will be a very entertaining team.

Don't look now, but it appears that WFT now has an offense.

They now have the Gunslinger, Ryan Fitzpatrick at quarterback, and added speed with the acquisition of former Carolina wideout Curtis Samuel.

He joins Terry McLaurin to create a formidable 1-2 punch at wide receiver. The signing of former Titans wide receiver Adam Humphries - an excellent slot receiver - was also a savvy move.

Not to be overlooked is the signing of CB William Jackson, which made an already excellent defense that much better.

Again, this is paper-based conjecture. Still, the Jets can't be worse than they were last year.

Put QB Zach Wilson at the controls of a well-structured offensive attack with two new wideouts - Keelan Cole and Corey Davis (not to mention TE Tyler Kroft) - and the Jets' offense is a more dynamic group.

A decent defense was then strengthened by the signings of LB Jarrad Davis, DB Justin Hardee, S Lamarcus Joyner and DT Sheldon Rankins.

The Jets will be better, especially with taskmaster Robert Salah at the helm.

Suffice it to say the Titans have holes to fill on offense after losing TE Jonnu Smith and wideouts Corey Davis, Adam Humphries and Khalif Raymond.

Yes, they signed former Rams WR Josh Reynolds, but he will have to prove that he can capably fill the role of being a featured target.

On defense, 32-year-old cornerback Janoris Jenkins was signed to bolster a thin defensive backfield. He looks to be on the downside of his career, so he may not offer much help. The signing of CB Kevin Johnson was merely a depth move.

Overall, the Titans lack skill and depth at key positions - something that could hurt them over the course of a long, physical season.

Free agency wasn't kind to the Raiders. They lost standout WR Nelson Agholor to the Patriots - plus much of their offensive line.

True, they signed former Bills WR John Brown to fill Agholor's spot, but he's coming off an injury-plagued year where he was limited to 33 catches for 458 yards. And he's no deep threat.

Granted, the signing of dynamic DE Yannick Ngakoue was a good move, as was snagging DE Quinton Jefferson from Buffalo.

However, if the offense doesn't produce - and it may struggle, given all its new moving parts - the Raiders' defense will be spending more time on the field. That's not a good thing.

Simply stated, replacing Ryan Fitzpatrick at quarterback with Jacoby Brissett significantly weakened the Dolphins at the squad's most important position.

What happens if QB Tua Tagovailoa gets injured, or gets mired in a slump? Who knows, as Brissett isn't nearly as dynamic as Fitzpatrick.

Sure, they signed former Texans wideout Will Fuller V, but can he stay healthy for a full season? Not likely, based on his checkered past.

If the Dolphins don't fill holes on defense and offense with all their draft picks - who will still have to develop, by the way - they could find themselves stuck in neutral this season.

It's possible that the Rams will be lamenting the departure of two relatively unheralded players: DE Michael Brockers and WR Josh Reynolds.

Brockers quietly complimented Aaron Donald on the defensive line, while Reynolds fit in comfortably with the likes of WR Robert Woods and slot specialist Cooper Kupp.

Yes, the Rams signed WR DeSean Jackson, but at 34-years-old, he's not the player - or deep threat - he once was.

With new QB Matt Stafford, the Rams' offense figures to be marginally better, while their defense may not be as dominant as it was in 2020. They'll contend for a division title at best.