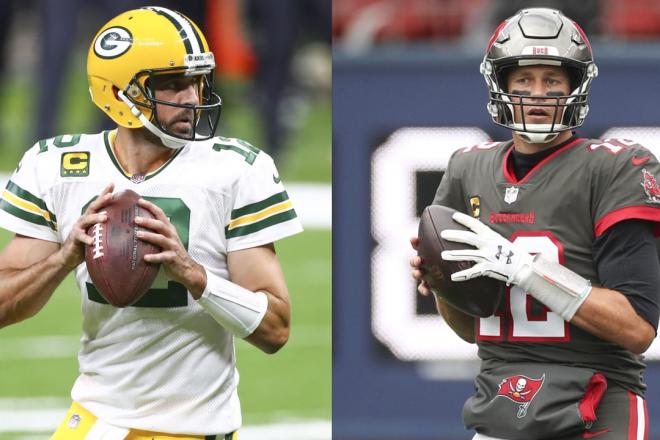 Will the #1 Seeds Prevail in the AFC, NFC Championship Games?

In past years, it's been relatively easy to predict which teams will advance from the two conference championship games to the Super Bowl.

That's not the case this year.

At the present time, both the Kansas City Chiefs and Green Bay Packers are slight favorites to play in the big game in Tampa. That said, neither team is a lock, for a variety of reasons.

Let's start with the AFC match-up between the Chiefs and the Buffalo Bills. Two factors stand out.

First, there's the health of Chiefs all-world QB Patrick Mahomes. Although he's been practicing, he's still in concussion protocol. He was pretty woozy after being hit hard by the Browns' Mack Wilson, and there's a chance he may not be cleared to play Sunday night.

Second, there are the Bills. Seeded number two, they are almost a mirror version of the Chiefs - powerful offense led by a great quarterback in Josh Allen, a capable defense with big play capabilities and playmakers on both sides of the ball.

If Mahomes is deemed fit to play, this could be a high-scoring game with the last team to touch the ball being the winner on a last-minute field goal.

However, if he isn't able to go, back-up QB Chad Henne - who doesn't possess the Mahomes arm talent or mobility (who does?) - will have to carefully manage the game, throwing shorter passes to the likes of Tyreek Hill, Travis Kelce et al. He's not as adept at throwing the deep ball, as he showed against Cleveland on his one deep heave, which resulted in a pick.

In a nutshell, the game should come down to quarterback play and how well the two defenses perform.

If Allen somehow outplays Mahomes - and that's a possibility, given how well he's played all year - then the Bills will have a chance. And if their defense rises to the occasion to harass and contain Mahomes, Buffalo could well advance to the Super Bowl. Those odds increase if KC is forced to start Henne at quarterback. While capable, he is clearly not the magical Mahomes.

Then, there's the Packers - Bucs match-up.

While there's no denying that Aaron Rodgers & Co. look unstoppable - the Packers were lights-out on both sides of the ball against the Rams last week - Green Bay is going to have to deal with the mystique of the GOAT, a.k.a. Tom Brady.

There are two intangibles at play:

The first, of course, is TB12. As history has shown, he knows how to get it done in the playoffs. Not only has he perfected the art of playing efficient, error-free football, he is a true leader who takes all his teammates to another level. The Bucs now believe in themselves from top to bottom.

Second, Tampa Bay's defense has stepped up their play big time. Last week, they pressured Saints QB Drew Brees incessantly (especially in the second half) and their defensive backfield has been coming on.

Should the Bucs be able to keep the game close - they cannot allow the Packers to score early and often - then they will have a chance to author an upset at Lambeau.

Brady knows how to win close games. If the game is tied, or Tampa Bay needs a touchdown to win it in the waning minutes, he's in his element.

The Packers can't allow that to happen. If they can hurry and hit TB12 on a regular basis and put points up early, then it's likely they'll punch their ticket to Tampa and ruin the Bucs' Super Bowl plans. However - as has always been the case with Brady-led teams - it might be easier said than done.

Sunday should truly be super, as both games - featuring three MVP candidates (Rodgers, Allen and Mahomes) and the G.O.A.T. - should offer plenty of excitement and intrigue!