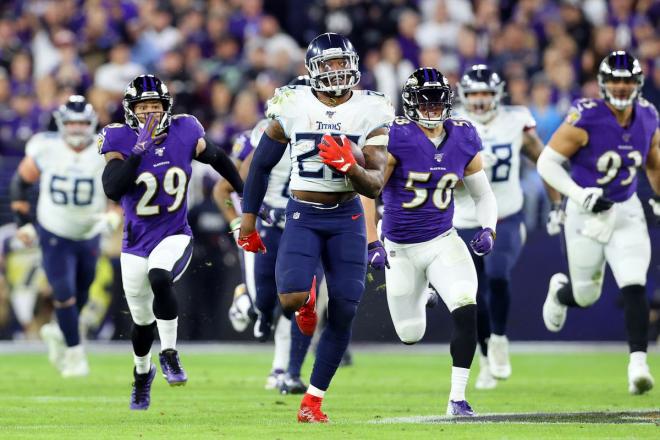 The key to this game could be the Colts' offense.

If the Colts can run the ball effectively - and they certainly possess that capability with splendid rookie RB Jonathan Taylor in the backfield - they will be able to keep the Bills' high-powered offense off the field, limiting scoring opportunities.

Bear in mind Buffalo's all-world WR Stefon Diggs (oblique) and fellow wideout Cole Beasley (knee) are both questionable heading into the game. Even if they play, their injuries could limit their effectiveness. Regardless, the favored Bills will have to play a complete, error-free game to advance. Buffalo by a touchdown.

Over the past few weeks, Lamar Jackson & Co. have found their game, literally running over opponents in the process.

To have any chance to win, the Titans will have to grind out long, time-consuming drives on the back of NFL rushing leader Derrick Henry. At the same time, they will have to corral Jackson and hold RB J.K. Dobbins to under 100 yards.

That's a big ask, as Tennessee's mediocre defense hasn't proven they can shut down any offense of late. If momentum is any indicator, expect the Ravens to win, likely by a field goal.

Intangibles figure to play a central role in the outcome of this game, Cleveland's first playoff contest in 18 years.

Most of those intangibles - playoff experience, a dominant pass rush and a QB in Ben Roethlisberger who knows how to get it done in the playoffs - should be enough to get Mike Tomlin and his squad through to the next round.

However, if the Steelers' front four fails to pressure Browns' QB Baker Mayfield and if Nick Chubb and Kareem Hunt start to chew up yardage on the ground, this game could turn into a nail-biter - especially if Pittsburgh's offense sputters, as it has in recent weeks. Steelers by 10.

As talented as the Rams' and Seahawks' offenses are, this game could turn into a battle of the defenses.

Over the last four games, the Seahawks' defense has allowed an average of 12.5 points per game - very impressive for a unit that struggled for the first three-quarters of the season. Meanwhile, the Rams' dominant defensive line could make Russell Wilson look human if Aaron Donald & Co. are on their game.

That said, if Jared Goff's injured thumb keeps him on the sidelines, it's unlikely that his back-up, John Wolford, will be able to replicate the magical performance he turned in against the Cardinals when he led the Rams into the playoffs in Week 17. Take the Seahawks by 10.

Don't tune into this game late, as it could be over early.

Combine the fact that Drew Brees and his mates will be on a mission to erase their last two playoff disappointments with Chicago's inability to beat a team with a winning record, and only one thing could prevent the Saints from winning: themselves.

If they play a clean, turn-over free game on offense and their defense doesn't allow any big plays (or for RB David Montgomery to run wild), the Saints should have little trouble dispatching the enigmatic, low-scoring Bears. Saints by 14.

If Washington's offense plays the way it did against the Eagles a week ago - tentative and uninspired - they will have little or no chance to bring down Brady and the Bucs.

The only way the WFT will have any chance to beat the Bucs is for their dynamic defensive line to make life miserable for the ageless Brady. If they can get in his face and make it difficult for him to connect with his talented receivers, they'll have a chance to keep it close.

At the same time, Washington QB Alex Smith will have to engineer some time-consuming drives and put up over 20 points. That may prove difficult with the returning Shaq Barrett, Jason Pierre-Paul and Ndamukong Suh applying pressure all game long. Bucs by 13.