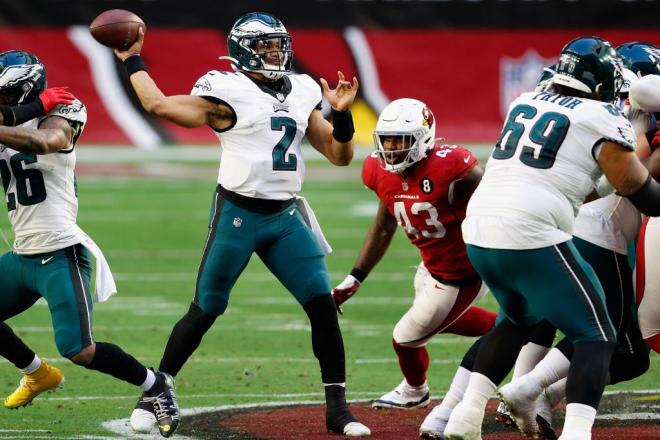 Championship Week is upon us. To all of you fighting for a championship trophy, bragging rights, money, or all of the above, congratulations! But, we aren't done yet. This should be the last week of fantasy football, but if it isn't, change your schedule for next year! Time and time again we hear about fantasy managers losing the championship because a star player was benched to preserve his health for the NFL playoffs. To ensure a a great championship week, make sure 2021 fantasy leagues end in Week 16! You won't regret it.

Hurts is exactly what fantasy needed... another rushing quarterback. He was amazing in his start against the Cardinals, and those who were willing to start him most definitely won their matchup. The same can go again this week as Hurts faces an easier opponent in the Cowboys. Hurts' rushing ability gives him a very safe floor, and with the matchup against a secondary allowing the third-most touchdowns to opposing quarterbacks, Hurts will end up a QB1 once again.

Fournette enjoyed his day in a Jones-less backfield. It looks like he will get the backfield to himself once more as Jones is doubtful to return in Week 16. Fournette will also benefit from the Detroit defense, otherwise known as the best matchup for fantasy running backs. Fournette is a borderline RB1 this week and needs to be in lineups.

With no Michael Thomas and a questionable Tre'Quon Smith, Sanders is the only trusted wide receiver left for Brees. Luckily, he gets a positive matchup against a vulnerable Minnesota defense allowing the second-most touchdowns to wide receivers. Sanders is a safe flex for any fantasy playoff team in need of help.

Thomas has become one of the most reliable fantasy options on this Washington offense. Rivera always had a knack for using his tight ends, and even with Thomas, Rivera has made him a focal point. Thomas' usage has put him on the fringe of TE1 status, and that will continue when he faces Carolina who allows the ninth-most touchdowns, and eleventh-most yards and fantasy points to opposing tight ends. Thomas is a safe, low-end TE1 for fantasy mangers this week.

Chicago's defense has been decent for fantasy, but not of the expectation most of you had if you drafted them. Still, they can pay off as they get to face a porous Jacksonville offense with a hobbled James Robinson. Chicago is a safe defense that fantasy mangers absolutely need to have in lineups.

Ben and the Steelers offense has looked absolutely terrible over the past three weeks. In fact, over the last two outings, Roethlisberger hasn't eclipsed 200 passing yards. He is strictly matchup dependent and in a matchup with the Colts, a much better defense than, say, the Bengals, Big Ben should not be in any lineups during Championship Week.

Davis and the Carolina offense looked poor against the Packers defense, and now Davis will face one of the best rushing defenses in the Washington Football Team. McCaffrey is doubtful to play, but that won't matter much as the Carolina offense is simply too one-dimensional and against the Washington front; justifying Davis may be a little hard to do.

So much for Chark's breakout year. A poor offense, injuries and multiple quarterbacks has put a major hamper on Chark's 2020 output. What hasn't made it any better is matchups like the one he is facing on Sunday. Chark will face a defense allowing the fifth-fewest fantasy points to opposing wide outs. Chark is just too unstable to be trusted, and being he is rostered in about 80 percent of most fantasy platforms, I'm here to tell you that it's okay to drop him. Chark, like this offense, is very hard to trust.

Gronkowski has had an up and down season and the introduction of Antonio Brown has significantly impacted Gronk's usage between the 20's. Although Gronk still gets his fair share of redzone targets, this matchup can go the Bucs way early and they should have no problem controlling the game on the ground. Unless you enjoy betting on touchdown upside, Gronk in a tough matchup for tight ends is not where fantasy managers should turn if they want to win their leagues.

The 49ers defense just allowed 41 points to the Cowboys. This defense isn't that bad, but they aren't that great either. However, the biggest problem for this fantasy defense, injuries aside, is that the offense loves to turn the ball over. Arizona's defense should generate plenty of sacks and some turnovers from Mullens. The Arizona offense will take every advantage they can with whatever the 49ers offense will give them. Kyler, Hopkins and company should put up plenty of points to warrant the 49ers defense a bench candidate in Week 16.