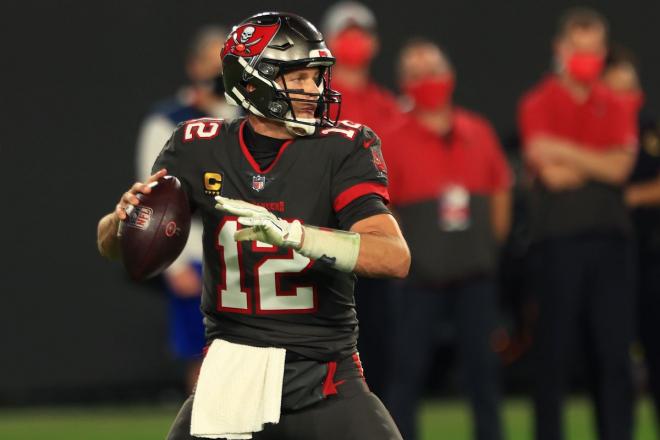 Week 15 is here, and that means for those who are reading this are either still fighting for a championship or avoiding some sort of punishment for coming in last place. Well, both outcomes are equally as important and this week can either save you of the embarrassment from your friends (me), or put you in a position to win your league and maybe win some money. Let's stop dancing around the inevitable and get into this week's 5 Starts & 5 Sits.

Tom Brady threw the ball only 23 times in last week's win against the Vikings. Game script should be different in this divisional matchup but more importantly, the matchup itself is the best for opposing quarterbacks. The Falcons allow the most fantasy points per game to the position and Brady should have no problem moving the ball up and down the field. With Ronald Jones out, Arians will be more inclined to lean on the veteran to get the ball moving, it's the best way to do it against the Falcons and there is no doubt the 21-year vet will end up a safe, but low-end QB1.

Davis has been one of the best waiver wire acquisitions of the year. It's the gift that keeps on giving. As soon as you think you're going to lose him, he's thrust into the starting role time and time again. The same is happening now as McCaffrey will be out for their matchup against Green Bay, fantasy's fourth-best matchup for running backs on a points per game basis. Davis is heavily utilized in this offense without CMC, so he could get you out of a bind in a pivotal week.

Aiyuk has been what everyone thought a healthy Deebo was going to be this year. Which is great if you're an Aiyuk owner, not so much for any Deebo owners. Aiyuk has been extremely efficient this year and although he has missed a few games due to injury, there shouldn't be any reason why he can't be trusted in your playoff lineup. Dallas has allowed the second-most fantasy points per game and a league high 22 touchdowns to opposing wideouts. Plus, Aiyuk is the only passing option left for Mullens to trust. He has WR1 potential this week. Aiyuken!!

Ebron's performance last week was poor, but so was the entire Pittsburgh offense. This week, if any week at all, is the week to right their wrongs. A matchup with a defense allowing the third-most points to tight ends in a position where fantasy players are the most desperate, Ebron should be trusted and posses high touchdown upside, as the Steelers will do anything and everything to stick it to their divisional rival and show everyone they are still worthy contenders for a super bowl. Ebron should be a fine, low-end TE1.

The Browns defense got torched last week, yes. But, the Giants are no Ravens. The Giants have been falling apart as of late and are allowing a league-high 12 points per game to opposing defenses over the last few weeks, and now the Browns and their league-leading pressure rate gets to face a bad offense with the potential of starting Colt McCoy behind center. Browns also get the Jets in Week 16, roster them now while you can.

New England's defense is very good against opposing quarterbacks. The second-best based on a points per game basis. Tua is not someone to go into the fantasy playoffs with. He can't be trusted. We like rushing quarterbacks, but in this matchup, the bad will outweigh the good. He simply won't be able to run his way into fantasy relevance and sure as heck won't do it through the air, as he might be out Parker, Gesicki and Grant.

Tampa Bay is one of the toughest matchups for opposing running backs, but most of us know that. Gurley was a top running back early in the season, despite his lack of efficiency as a runner. Well, his touchdown upside and usage in this offense has turned to dust and blown away. Gurley is irrelevant in fantasy right now, as last week he only saw six carries. There are better options than Gurley, such as Wilson, Jr. from San Francisco, who should be available on waivers. Sit Gurley, he can't be trusted because his fantasy floor has vanished.

Cooper had a mere four catches last week, yes he salvaged it with a touchdown, but this offense is not an offense to be excited about. Some of us may not be able to sit Cooper, but expectations need to be severely tempered. San Francisco's secondary is going back into form with Sherman back in the lineup. Cooper is a risky play and checks in as a WR3 in this tough matchup.

Smith returned from injury and only saw two targets, getting outpaced by teammate Geoff Swaim. It seems like Smith is being eased into a workload again and that's not something fantasy managers like to see when in the playoffs. Smith also gets a Lions defense that has allowed the second-fewest yards and receptions to tight ends. Smith should be benched this week.

The Eagles travel to Arizona where they face the high-powered Cardinals offense. Now, the Eagles defense has been good, but their 13 turnovers this year is not exciting. The Eagles don't have much upside and will carry more risk in this matchup. It's not a defense worth trusting this week. Yes, Hurts has provided a much-needed spark to this offense, but he will turn the ball over, giving ample scoring opportunity to Kyler and the Cardinals offense.