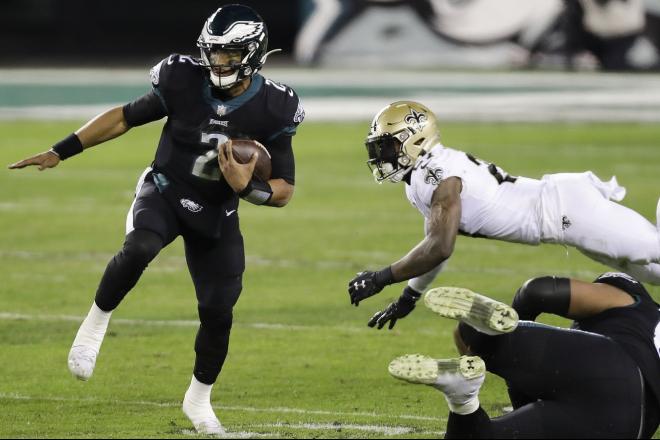 Whether you’re one week into your fantasy playoffs or just starting them this week, finding gold on the waiver wire this late in the season can be the difference between you winning your league or avoiding last place. Whether you’re looking for a higher ceiling or a replacement, here are players you should target heading into Week 15.

What a disaster situation the Eagles found themselves in with Carson Wentz. I do not envy Howie Roseman and the challenge of figuring out what to do with Wentz’s contract come this offseason. Doug Pederson made the switch to Hurts after abysmal QB play from Wentz, in a division that is still very much up for grabs. Hurts took the opportunity and ran with it, upsetting the Saints and sparking the previously dormant offense. Hurts looked poised and ready for the moment, putting up 167 and a touchdown through the air while adding another 106 yards rushing. Next up is a matchup with a suspect Cardinals defense... Hurts looks primed for another good showing.

I know, I know, Drew Lock has been terrible this season. One week removed from putting his hand up to his ear against the Chiefs and then embarrassing himself on Sunday Night Football, Lock bounced back against the Panthers throwing for nearly 300 yards and 4 touchdowns. Lock has a favorable matchup against Buffalo next week at home, putting him in a good spot to put up some numbers.

Ahmed’s injury situation needs to be monitored before plugging him into your lineup, but if he’s healthy he is worth a roster spot and maybe even a spot in your lineup. With Myles Gaskin out on the COVID-reserve list, Ahmed is in a spot where volume should be available with the limited options the Dolphins have at RB.

Another situation that needs monitored – Wilson Jr.’s backfield mate Raheem Mostert. Mostert is expected to have his ankle evaluated this week to see if he is good to go for Sunday’s matchup against the Cowboys. If Mostert is unable to go, I’m plugging Jeff Wilson Jr. in as an RB2 in every format. The Cowboys have been laughable against opposing RB’s, pair that with a rush-heavy offense and you should expect a big day.

As I mentioned with Salvon Ahmed, this situation needs to be monitored as well. If Ahmed is unable to go, Lynn Bowden Jr. serves as a candidate with some big potential. Carrying both the RB and WR designation, Bowden only received one carry Sunday against the Chiefs, but he was targeted 9 times and hauled in 7 of those for 82 yards. Bowden can be an intriguing deep league desperation flex-play, if you’re short on options, Bowden Jr. is your guy.

With the Steelers not exactly holding the firmest grip on the AFC North division lead, it appears like they will be playing their starters through the rest of the season. Diontae Johnson, who’s been Big Ben’s favorite target this season (113), has been struggling with drops lately, which could open the door for more opportunities for Washington. Washington has also scored in his last two games, if you need a low-end flex, he can be a serviceable option against a bad Bengals defense.