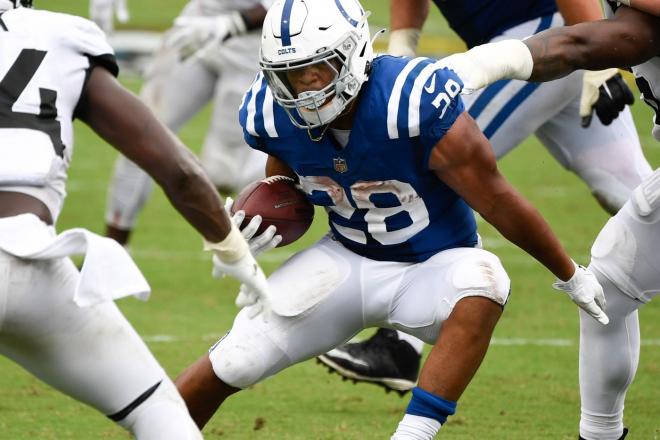 Week 14 marks the first week of playoffs for most fantasy managers, and for others, it marks the last week of the regular season. Whichever side you're on, this is one of the most crucial weeks of fantasy football (pending a championship matchup). Let's get into who fantasy managers should trust in Week 14 and what players should be on your fantasy bench.

Herbert finally came down to earth last week when the Chargers suffered a blow out loss to the Patriots. But don't look at that as the norm, the norm for Herbert is that he is a very fantasy relevant quarterback who should be in starting lineups. That's the case this week when Herbert gets a matchup with a Falcons defense allowing the most points to opposing quarterbacks on a points per game basis. Herbert and the surrounding talent for the Chargers should be in lineups.

Taylor now has two straight weeks seeing a majority of the touches in this crowded Colts backfield. Hines is still getting his usage, and is worth a play this week too, but Taylor gets to face a defense allowing the fourth-most points to opposing running backs. If Taylor stays involved in the passing game and continues to handle the bulk of the carries, he should return RB1 value this week.

Davis has emerged as Tannehill's go-to target. Although the touchdowns seem to gravitate toward Brown, Davis is catching enough passes and garnering enough yardage to stay in lineups for the remainder of the fantasy playoffs. He gets a juicy matchup with a Jacksonville secondary who simply can't stop the pass, allowing the fifth most fantasy points per game to the position. Davis is a safe WR2 with touchdown upside.

It's nice to see Fant still as the focal point of this offense. But lately, he hasn't been able to turn it into much. Luckily, he gets a plus matchup with the Carolina Panthers, who may be out their top linebacker, Shaq Thompson, due to COVID. Fant will be able to make the most of his opportunities this week and should find the endzone, a facet of his game he's been lacking this year.

I'm picking on the Giants offense again, but can you blame me? The Seahawks defense performed well last week and Colt McCoy is still the quarterback. The Cardinals have no problems getting sacks and should have ample opportunity to garner a few turnovers. This is one of the safest defenses to play this week. They are only owned in about 25% of leagues, so jump on it while you can.

Newton had a field day last week thanks to a generous game script and a depleted Chargers defense. That won't be the same when he goes to the Rams in Week 14. Only the Steelers are allowing fewer points to quarterbacks this season, and Cam has had such an up and down season, it's hard to bank on him running in another two touchdowns this week. Newton is a risky QB2, find someone else this week.

The Steelers are out Bud Depree, and it's a factor, but not as much one might think. The Steelers are still a top three defense against the run and when you factor in that this is a shared backfield with a quarterback who can also vulture touchdowns at the goal line, it's not inviting to stick either Singletary or Moss into your lineup in an important week.

Don't follow the mirage that was last week's hail Mary, which accounted for over half of his yardage and his lone touchdown, Ruggs cannot be trusted this week. We like upside plays like Ruggs, but in the fantasy playoffs (or if you're still fighting to get in), this isn't a risk fantasy managers should take.

Thomas had an incredible game last week against a tough Steelers defense, so we can trust him in the fantasy playoffs.. right? Eh, maybe not. This is the second-toughest matchup for opposing tight ends, and although the San Francisco defense is a shell of it's former self, mainly due to injuries, they are still one of the best defenses against opposing tight ends. Don't be that person complaining a week from now about playing a WFT tight end in a tough matchup.

The Dolphins defense... let me just say, they have been a pleasant surprise. In the many years prior, this defense looked like it was trying to be dreadfully bad. But they've turned things around and that's nice to see. And now, you can't play them in Week 14. Kansas City doesn't turn the ball over and they score too much for fantasy managers to continue to lean on the Miami defense this week. The Kansas City treatment is strong with this one, so look elsewhere.