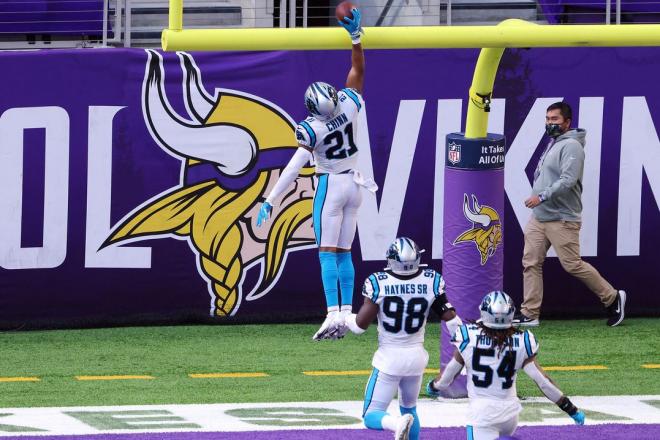 NFL: These 6 Rookies Are For Real

Every season, each NFL team has several rookies on their roster, from (supposedly) can't miss prospects, to individuals who've made the team through hard work and sheer determination.

And while each club has high hopes for these young players, they - at least initially - try to temper those expectations. After all, moving up to the NFL from college can be quite the adjustment - one that, in most cases, takes time to make.

Except, it would seem, for these six rookies.

Jeremy Chinn, S, Carolina Panthers.
Simply put, the 6-3, 220 pound Chinn has already established himself as a presence every time he steps on the field.

Exhibiting great instincts - his positioning and timing is impeccable, and his physicality is undeniable - the 22-year-old has recorded 49 tackles in 12 games.

Thus far, his best outing was in Week 12, when he made seven solo tackles and added six assists. Opposing offenses are already game-planning around Chinn. That's a huge accomplishment for a rookie.

Antonio Gibson, RB, Washington Football Team. Head coach Ron Rivera and his staff were so impressed with Gibson during training camp that they released future Hall of Famer Adrian Peterson in favor of the 22-year-old Memphis alum.

Since then, he's become Washington's undisputed starter, displaying a great blend of speed, elusiveness and power. If he stays on his current pace, he'll have a shot at 1,000 rushing yards - not bad for a converted wide receiver.

Michael Pittman Jr., WR, Indianapolis Colts. To some, Pittman Jr.'s 101-yard outing against the Titans in week 10 was a surprise, but it shouldn't have been.

Just the week before, he'd put up 56 yards on four catches against a tough Ravens defense. In just eight games, he's caught 26 Philip Rivers passes for 330 yards, one TD and an impressive average of 12.7 yards per catch.

At 6-4, 223 pounds, Pittman Jr. is just learning to use his size and deceptive speed to his advantage. Look for him to continue to improve as he learns how to exploit different coverages - and for Rivers to go to him more often in the coming weeks.

Chase Young, DE, Washington Football Team. Things are looking up in Washington due to the performance of Gibson on the offensive side of the ball - and DE Chase Young on defense.

Only 21 years old, Young - the second overall pick in the 2020 NFL Draft - is already playing like a veteran and delivering on the potential he showed at Ohio State.

With 4.5 sacks, 22 solo tackles and five assists, the 6-5, 264 pound defensive end is the anchor of Washington's defensive line - and cut in the same mold as another defensive lineman, the Rams' Aaron Donald, a perennial candidate for defensive player of the year.

Clyde Edwards-Helaire, RB, Kansas City Chiefs. Expectations coming into the regular season were that the 5-7, 207 Edwards-Helaire would fit in perfectly with Patrick Mahomes and Co..

That said, no one expected him to rush for 138 yards in his first-ever NFL game against the Texans. Since then, the former LSU standout hasn't looked back, rushing for 692 yards on 151 carries (plus 234 yards on 30 catches), good for 4 TD's and 4.6 yards per carry.

Firmly established as KC's starting tailback, he has a legitimate shot at 1,000 yards barring injury.

Rodrigo Blankenship, K, Indianapolis Colts. While we don't often mention kickers in this space, we had to mention Blankenship.