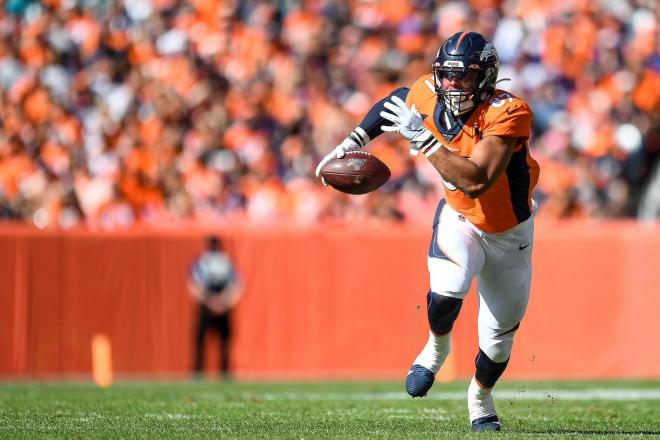 Another week down and playoffs either become more clear or grow evermore murky. With a few Thursday games this week, why not share an early Starts and Sits article to jump start a joyous turkey day.

We hope all of you find the time to be thankful, especially in a year such as this one, and remember the four F's - Friends, Family, Feasting and Football.

I'm sure no Eagles fans have been thankful of Wentz's level of play this year. Although he has been very bad, indecisive and other not-so-good adjectives, he gets to face Seattle's bad secondary in what should be a higher scoring affair. It is hard to trust Wentz, but a plus matchup at home with his potential for rushing touchdowns, he's a worthy play.

Where do I start? How about this is the best running back tandem in the NFL on a team that loves to run the ball. Hunt owners should not be scared to send him out there every week especially in a matchup against the Jaguars who allow the sixth-most points per game to opposing running backs. Expect the Browns to be up in this one as both players have the opportunity for 15+ touches and a score.

Agholor is seeing the highest snap count among Raiders wideouts in 2020, and he's been hit or miss, I get it, but he gets a matchup against the 31st-best matchup for wide receivers. He's a low tier option, so there is risk, but his recent volume and snap share shows he can be a viable fantasy flex option in the right matchup. In deeper leagues, I wouldn't be afraid to roll Ruggs out there either. This is the kind of matchup we can see him get three or four targets and take one of them to the house.

It's promising to see Fant out there garnering at least six targets in six of nine games this season. But, ever since Week 2, fantasy managers have probably been a little underwhelmed with the second-year tight end. Expect him to have a good game this week as he faces a defense that ranks 19th against opposing tight ends in a game where the Saints are projected to score a lot of points. The Broncos found a grove late last week when targeting their tight ends, they'll notice early that if they want to compete with the Saints in this game, they'll utilize their top offensive weapon.

The Bengals were already a decent play for opposing defenses, but now it becomes a juicy matchup given that they will be out their top running back and former first-overall draft pick at quarterback. Ryan Finely looks to get the start and that means only one thing... play the Giants D/ST.

Cousins continued his up and down season with a great performance last week against a vulnerable Dallas secondary. Now, he gets a defense that just shutout the Lions and let's not forget, Cousins' top receiver, Adam Thielen, has been placed on the COVID/IR list. These aren't the circumstances fantasy managers would like to see when starting Cousins... so don't.

It was promising to see Edwards-Helaire get a decent amount of usage and have his first multi-score game of the season. But he is still sharing a backfield with Le'Veon Bell and a matchup against a top ranked defense for running backs? CEH has been underperforming since Bell's arrival, saved by touchdowns in a few matchups, it's hard to bank on that against this defense. And yes, it's also hard to sit him, especially given the offense, but if you have other options it may be wise to make the pivot.

I want to start by professing my immense support behind Tee Higgins. He has been one of the best rookie wide receivers this year, but Burrow has been stealing headlines. He deserves credit. There, I said it before Finley comes in and ruins him. But seriously, Finley puts a hamper on the expected production for these wide receivers. The Bengals were throwing the ball left and right and Burrow looked pretty good while doing so, but do we really think that's the game plan here with Finley? Even so, do we want the people he's throwing to? Let's wait and see who, if any, of these receivers establish a rapport with the new quarterback.

Cook had one target with Tayson Hill under center. Hill tends to extend plays and look toward Michael Thomas when he's throwing. None of that seems to benefit Cook, as he moves toward fantasy irrelevance without Brees. Don't trust him, especially in this tough matchup against the Broncos.

Kansas City still has a good offense. I didn't know if you knew that or not. But the Buccaneers top tiered defense will have a run for their money, and I'm not willing to bank on the defense that just let Goff throw for over 375 yards and three scores.