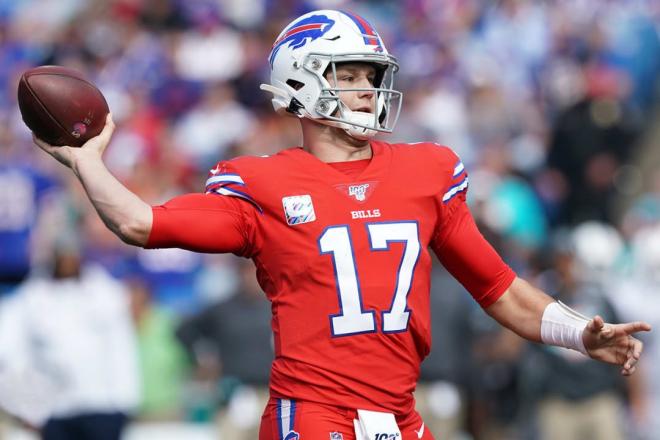 With the election pending, our minds in the U.S. have been elsewhere other than football. But, in these times, it is best to find an outlet to tame the stress and anxiety. So why not choose one of the most stressful sports to relieve some of that tension? I know it helps me. So, mute the tv, grab a drink, and stress out over fantasy football! Let’s get into our 5 Starts & 5 Sits.

Allen started off hot the first four weeks of the season, but since, has fallen back to earth and putting up pedestrian numbers. This week, he’ll bounce back as he faces the second-best matchup for a quarterback. If John Brown comes back this week, Allen’s floor and ceiling will see a positive bump. But even without Brown, Allen poses top five potential this week in a game in which he’ll have to keep up with Russell Wilson.

Yes, the Jaguars are bad against the run. I don’t think I need to tell you that the Jags defense ranks 27th against the run, allowing over 100 yards per game to opposing running backs. But with Minshew out, the Jags offense may not have the capability to keep up with the resurging Texans offense. The Texans will be able to run the ball all game without fear of falling behind, providing ample opportunity for Johnson to finish top ten this week in a positive matchup.

Alright, Jeudy, this is your week! Jeudy has seen some tough defenses coming out of the bye with the Patriots, Chiefs, and Chargers, but now he gets a secondary ranked 29th against opposing wideouts. The Broncos offense has looked okay, but the defense has looked pretty bad. Atlanta should torch this secondary and force Drew Lock and company to keep it close. With Tim Patrick injured, Jeudy should see a consistent number of targets and provide plenty opportunities for big gains. With injuries and byes hurting fantasy owners, Jeudy is a high-reward flex option this week.

Fantasy owners are getting worried about Titans tight end, Jonnu Smith. And it’s understandable. The past three weeks he has 4 catches for 51 yards and no touchdowns. The emergence of Corey Davis and return of Brown has capped Smith’s upside. But the wideouts will have a hard time finding separation against the Bears strong pass defense and Tannehill will need to look underneath and over the middle to exploit the Bears weaknesses, this being the tight end. The Bears are 25th against the position, giving Jonnu his chance to restore confidence to fantasy managers. I’m not too worried about Firkser, he had a good game three weeks ago and has four catches since. Roll Smith out there in Week 9.

The Cardinals defense has improved tremendously over the past couple years and has become a viable option in most weeks this season, including this week at home against a rookie quarterback. With at least three sacks in five of seven outings, this defense is a safe option, with some upside. Am I predicting this defense scores its first touchdown this week… maybe.

Tannehill has been so good since taking over the starting role last year. With multi-touchdown performances in all but one game this season, it’s hard to sit him. But Chicago has been amazing against quarterbacks. Brees’ performance last week (280 yards and two touchdowns) is the best fantasy performance allowed by this defense. Tannehill hasn’t surpassed 250 yards passing in five of seven games so far in 2020. The prospects are not high for this run first offense, as Vegas projects this as a pretty low scoring game, so if you have a pivot option for Week 9, I’d take it.

Again, it’s hard to sit a vital part of your fantasy team, but Taylor has been seeing a limited amount of touches in a (surprisingly) crowded backfield. Wilkins has been cutting into Taylor’s workload and passing downs have been reserved for Hines. Add in a tough matchup against the second-ranked Ravens rush defense and an ankle injury to Taylor, and you have a high-risk player on your hands. If you have the depth, pivot from this option.

Washington’s secondary is still good against opposing wideouts, but that isn’t the biggest knock on Salyton this week, it’s his quarterback. Jones does not look good, and although Slayton has seen an abundance of deep targets, Jones can’t hit him, and even Slayton looked a little lost on a few of his deep routes last week. Shepard is back in full and Tate will see a decent amount of looks as well. I’m not high on Slayton this week, but hey, if he catches one of those terrible deep throws, it’ll shut me up.

Two targets, one reception, eight yards. That’s Gesicki’s first game with the rookie quarterback. That’s not a stat for fantasy managers to happily march Gesicki into their lineups. At this point, until we see the connection between the two, Gesicki is out as a viable tight end option, but is still worth a hold if they begin to establish a connection.

The Bills defense has been hot and cold this season, but in a tough matchup, this defense should be left on the bench, in fact, with Arizona and a bye in the next two weeks, this defense should end up on waivers. Focusing on this week, the Bills face one of the most high-powered offenses in football right now, who may get Chris Carson back this week. The Seahawks are letting Wilson do his thing and his thing is embarrassing opposing defenses. There are safer options this week like the Cardinals, Packers, and Houston.