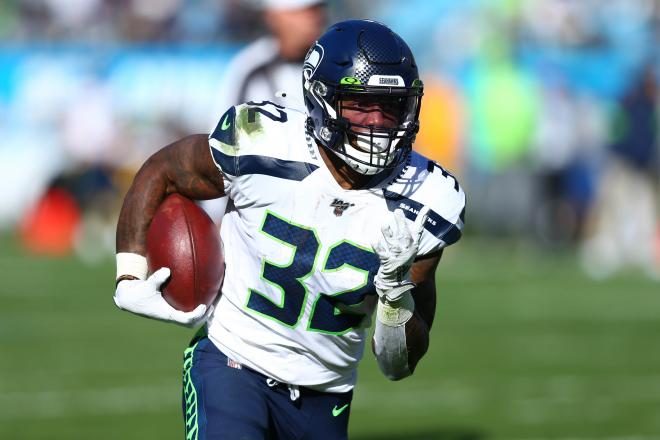 Half way through the season and we may have just seen the best week yet in terms of NFL football. There were five games this week that were decided by 3 points or less! It was an action packed week indeed. Unless, that is, you are the kicker from the Cardinals or just got pummeled this week in fantasy. Probably not too much fun. But anyways, let's go over the bumps and bruises from this weeks slate of games and find you some possible Week 8 streamers and maybe some weekly starters for the upcoming weeks in our Week 8 Injuries and Opportunities.

It is confirmed Beckham Jr. will miss the entirety of remainder of the season. Now this does open the Browns offense up tremendously for a few guys not named Jarvis Landry. Although Baker Mayfield just had his best game of the year tossing 5 TDs, he has yet to surpass 300 yards passing this season. It was even risky for Beckham Jr. owners to play him in some weeks due to Mayfield's play. On the flip side, the Browns are home for the next month playing OK defenses at best in the Raiders, Texans and Eagles. With Odell gone for the year, it makes sense taking a risk on Peoples-Jones or Higgins. I will tell you, I'm way more confident in Higgins, who has caught 92% of his 12 targets this year, which will build trust with Baker down the road. If you have Landry sitting on your bench, it's time to dust off that roster spot for him as he's been averaging about 6 targets a game this season and should see a larger, steadier uptick in volume with Beckham Jr. out for the year.

Once again Carson is banged up, this time he has a mid-foot sprain and might miss a week or two. Now I get to talk about my boy Carlos Hyde again. He picked up a heavy workload after Carson went out, ending the day with 15 carries for 76 yards and a TD, adding 3 catches out of the backfield. I want to reiterate that Hyde is a stud, rushing for over 900 3 times in his career and averaging over 4 yards per carry with over 1000 carries. Now, he's in the best offense he has ever played for. If Carson is out, Hyde is slated as the main back at home against the 49ers who looked good against a diminishing Patriots offense. Without a few key players including Nick Bosa out in the 49ers defense, Hyde is a sure fire RB2 next week. Jump on him now.

I think the Broncos just like being on this article because they show up almost every single week. Now it's pretty simple when a team has a two-headed monster at running back, when one gets hurt you play the other guy, even if that other guy just got a DUI. Gordon is a RB2 in any format with Lindsay out. In the two games when Lindsay was missing, Gordon had 19 and 23 carries in each game respectively. A concussion might knock Lindsay out for a couple weeks due to the NFL protocol, which should make Gordon owners happy as they play the Chargers and Falcons in the upcoming weeks, two teams that are mediocre against the run. Pending how long Lindsay is out, Freeman is a risky steamer who will be the relief back to Gordon, but shouldn't see more than a few carries.

Now, just like the Broncos, the 49ers just absolutely love being in my article with Mostert getting hurt just last week and now it's Jeff Wilson Jr.; who was a week removed from a Questionable designation and just enjoyed a monster game only to see him sidelined once again. McKinnon is not in my opportunities this week, but Hasty is after seeing 19 touches the last two games. Kyle Shannahan likes to feed the hot, secure hand, so you could see Hasty have a big game even with him losing a few carries to McKinnon. Speaking of feeding the hot hand, with Deebo Samuel suffering a hamstring injury, Aiyuk is a fun pickup this week. With about 5 targets a game, he will see an uptick in volume not only in passing work but as well as from the backfield where he already has two rushing touchdowns this season. With the upcoming game against a terrible Seattle defense, both Hasty and Aiyuk are high risk high reward flex plays this week.

The Cardinals have a bye this week but don't let it stop you from snagging Edmonds from waivers if he's available. Drake will be out two to three weeks due to a torn ligament and Edmonds will walk into the starting role on a high-powered offense. Edmonds is a terrific receiver out of the backfield and an elusive runner. He should be rostered in all leagues as he immediately provides rosters an RB2 with the upside of an RB1.