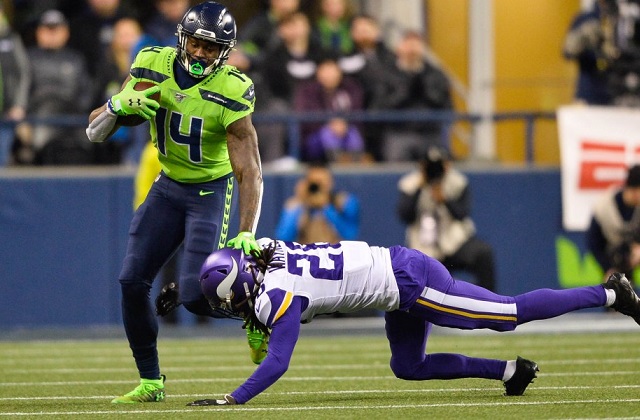 Something is in the water over in Tampa Bay that is causing hamstrings to explode. After Mike Evans was ruled out for the season with a hamstring injury, Godwin injured his the next game. And not to mention, Scott Miller re-aggravated his hamstring injury. This is a huge blow to fantasy teams in the playoffs. Perriman is a good pivot and has a great matchup; he can absolutely be in lineups. Watson is more of a deep league play, don’t go that direction unless your deep league is scarce at wide receiver. And Scott Miller may play in this but either way, he isn’t in lineups.

Cook left owners with a dud after going down with another shoulder injury. It will be interesting to see the timeshare in this backfield if Cook goes. Reports are positive and this will only muddy the waters. If both Cook and Mattison can go, I don’t see any reason to play Boone, however, you have to start Cook but it won’t feel good to do so as this backfield will be shared. If Cook can’t go, I want Boone in my flex rather than Mattison due to health. Monitor this closely.

Chark has been cleared to practice and is trending upward to play this Sunday against the Falcons in a plus matchup. If Chark can go, he’s been too good to not have in your lineups but he will come with risk. If he can’t suit up, Conley takes over that role and although he won’t get the volume nor have the athletic ability of Chark, he will be poised for the feature role and presents the most touchdown upside. Westbrook is more of a deep PPR play for your flex position. He doesn’t have the touchdown upside but should see a lot of targets underneath.

Edelman had his worst performance of the year this past Sunday and it came in the fantasy playoffs. Now, he is questionable to play against the Bills tough secondary on a quick turnaround game on Saturday. White gets the biggest bump here, as he will continue to see a few rushing attempts per game but will add a couple extra targets in the passing game. He could be a league winner if Edelman is out. Sanu would become a solid flex play if Edelman is out and should see a majority of the leftover targets. Harry isn’t worth the risk in the playoffs, I would stay away.

Dak should be good to go and he will be in lineups as he faces a bottom half secondary in the Eagles. If he is unable to go for some reason, the only person this benefits is Elliott who will see a large uptick in usage on the ground. But, Dak will play this week.

Not much of an injury here but it is important. Gordon has been suspended for the fifth time in his career and is out for the remainder of the regular season. This opens up opportunity for Lockett and Metcalf to provide safer WR2 numbers this week against a poor Cardinals defense. They should both be in lineups.