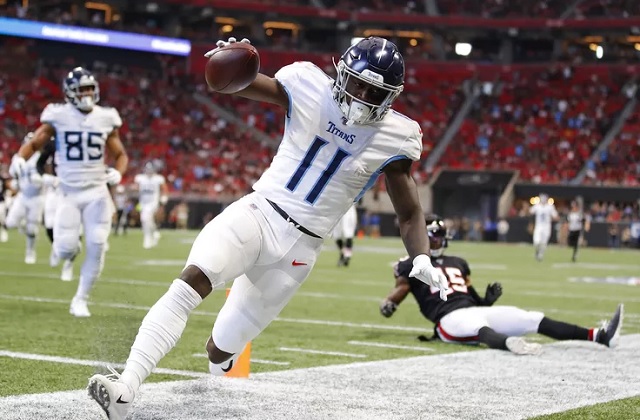 I hope most of you have advanced further into the fantasy playoffs after last week's high scoring yet injury-plagued stretch of football. If you haven’t already, check out this week’s Injuries and Opportunities article to get the updates on some of the most important injuries and the players who will benefit the most. With two more weeks in most fantasy formats, let’s dive into our 5 Starts and 5 Sits that’ll help you continue your playoff push.

The Texans allowed Drew Lock, in his first start, to finish as the QB7 in Week 14. Now, the red hot Tannehill gets to play this crumbling defense. A home matchup will also bode well for Tannehill, who should be owned in all leagues. Tannehill has one of the best fantasy matchups the next two weeks and can easily help fantasy GM’s win a championship. He has top five upside.

Hey, start every running back against the Panthers; they are that bad against the run. Now, without Penny taking carries away, Carson is primed for one his best weeks yet. There is no situation where Carson is on your bench. He gets to play the defense who has allowed the most points at the running back position this season.

The stack! Yes, I want all I can get from the guy who has benefited most from Tannehilll’s terrific play. Yet another great matchup for the young talented wideout, who breaks a tackle every single time he touches the football. It seems unfair. He has began to dominate the target share in Tennessee since Tannehill has emerged. His ceiling has risen and with that, so has his floor. Like his quarterback, he needs to be owned in every league. He’s a great play this week. (And congrats to the few who played him last week, he saved me).

Howard has been one of the biggest busts of 2019. Arians has done him no favors this year and most small opportunities Howard has had, he juggled it out of his hands. But something happened this past Sunday. Howard was actually involved. Why? Because the number one target in the Buccaneers offense is out for the season. Although Godwin will see a few extra looks and Perriman will benefit from the absence greatly, Howard will be a focal point (outside of Godwin). He has seen 11 targets over the past two weeks and has utilized the opportunity, going for 134 yards. He also played the second most snaps of the season last week thanks to Evans’ early departure. The Lions are also pretty bad against the tight end and Howard is still an athletic freak. Look for Howard to have one of his best fantasy performances of the year.

The Eagles are fighting for playoff contention and benefit from a stretch of good matchups. The Eagles are trying to stop the pass but the issue is they can’t. Luckily, this week they get Haskins who prefers to take sacks rather than throw the ball away. Every game is a must win from here on out and a divisional win only helps their case for the playoffs. The Eagles defense won’t come out as they did against the Giants. They should have enough sucks and turnover opportunity to be a safe defensive play. (I also like the Seahawks defense at home against a turnover prone Kyle Allen).

The Chargers are top five against the pass and Cousins has been trending downward over the past couple weeks. A healthy Thielen can help boost his production, but the Vikings will attack where the Chargers defense is most vulnerable, the run game. The Vikings will game plan to spearhead the competition with a lot of Cook and Mattison (to help preserve Cook’s recent injury). There are better options out there. (I like Baker as a streaming option now that Njoku is back. I also like Jimmy G. as a streaming option against a bad Atlanta secondary who just lost Trufant for the season.)

I like the Eagles defense this week. And although the injury to Guice helps tremendously, the Eagles rush defense has been great. In standard formats you may be able to get away with flexing Adrian Peterson because he should get the volume with carries. But he doesn’t see enough passing volume to be worth a play in any other league formats. I’d rather have someone like Patrick Laird, who has been running away with the job in Miami and will have around 15 attempts on the ground and four to five opportunities through the air against a poor Giants defense. The opportunity is similar but pass catching opportunity and matchup is what I’m looking for in a deep flex.

With Auden Tate done for the season, Green “day-to-day” and John Ross being eased into action, Boyd is the only option left in this receiving core. This is usually a good thing, however, this means he will have to face Gilmore and the Patriots secondary alone. This isn’t a situation fantasy owners will likely want to put themselves in. He isn’t even worth the flex play simply due to risk and limited boom opportunity.

If there is one thing the Panthers defense is even remotely good at, it’s covering the tight end. Hollister suffered last week due to drops and the Seahawks likely won’t need him to win this game. The secondary is beatable and its comical how easy it is to run on this defense. Hollister will be underutilized. Look elsewhere.

The Jets have been a great defense lately but most of that can be attributed to their easy schedule. However, they are banged up and have to travel to Baltimore on a short week. With news coming out that Jackson will play, the Jets are a defense to have the bench. The Jets offense can also surrender poor field position for this defense as the Ravens are a top five defense and blitz at the highest rate in the NFL. There are good streaming option this week. (Seahawks, Browns, Eagles).