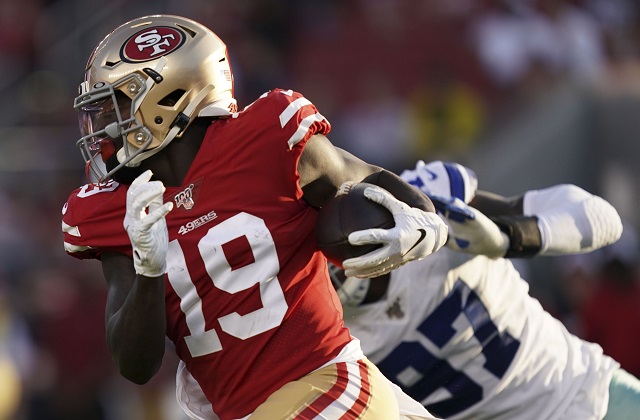 It’s down to the stretch run; time to take some chances and make your way to the playoffs. It is also time to stash some backups and handcuffs who could get a lot of playing time towards the end of the season. Last week recommendations of O.J. Howard and Randall Cobb paid dividends immediately for owners who picked them up and plugged them in for this week, lets keep it going!

With Devonta Freeman exiting Sunday’s contest with an ankle injury, Hill stepped in and carried the ball 20 times for 61 yards and found the endzone on a 10-yard catch. This marks the second consecutive week that Hill found the endzone. Up next for the Falcons is a contest against Carolina, who have been vulnerable against the run all season. Monitor the status of Freeman going into the weekend, if he is out, plug Hill in right away.

This is very specific to Saquon Barkley owners. Last week was not a good one for the second-year star out of Penn State. He carried the ball 13 times for 1 yard – yes, I too thought it was an error. The reason why Gallman should be rostered is that Saquon was banged up in Sunday’s game against the Jets. If Saquon were to miss time – or the Giants decide to hold him out – Gallman has already proven to be a good option, notching 24 points in a start against Washington in week 4.

In Monday’s game against the Seahawks, Samuel looked like what many 49ers management, coaches, and fans thought they would be getting when they drafted the receiver from South Carolina in the early second round. He ran great routes in 1 on 1 coverage and was physical with the ball in his hands, breaking tackles and punishing defends to pick up extra yards. With Emmanuel Sanders exiting early with an apparent rib injury, Samuel looks like he is poised to excel in this offense. Plug & Play Samuels this week against the Cardinals.

Since the Steelers bye week in Week 7, Washington has averaged 5.7 targets per game and had his best game this past Sunday in a win over the Rams. Washington snagged 6 passes for 90 yards and a touchdown. With many defenses keying on JuJu Smith-Schuster, it leaves the door open for others to step up and make plays… Washington is trending up, grab him and play him as he has favorable matchups against Cleveland (twice) and Cincinnati in the next three weeks.

Claimed off the practice squad after week 5, Hollister has become a large part of the Seahawks passing game – which is led by MVP candidate Russell Wilson. In his last two outings he has scored 3 times and been targeted 16 times, 10 of those targets came against the 49ers in Monday’s OT win. I don’t expect Hollister to have the success Will Dissly did in the early part of the season, but he is clearly a big part of this offense which has been on fire lately.