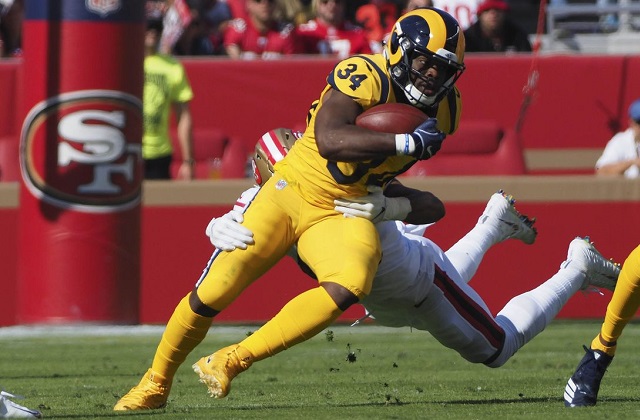 Did you lose in Week 1? Was your first week of “new year, new me” ruined? That’s ok, in fact, its more than ok. Losing in Week 1 is a huge advantage for leagues with a classic waiver wire. You’ll get the top half choice at whoever you want! Put claims in on the following players and get back on track for Week 2.

Scoring is based on ½ point PPR, % rostered based on ESPN

Sorry Todd Gurley owners, it appears that Sean McVay is a “load management” guy. While Gurley did have a decent fantasy day with 97 yards on 14 carries, Malcolm Brown did the damage in the points department with two scores and 53 yards rushing. While I wouldn’t expect this week to week with Brown, he is worth a waiver claim as this very well could be the route McVay will go to keep his all-pro running back healthy all season.

Peterson was a healthy scratch this past Sunday against the Eagles. Second year pro Derrius Guice made his long-awaited debut in which he only rushed for 18 yards on 10 carries. The unfortunate news for Guice is that he suffered a meniscus injury and is slated to miss multiple weeks. Expect AP to fill his usual role as the early down back while sharing time with Chris Thompson. Who knows? Maybe the future Hall of Famer has another good year in him.

With an injury to Tevin Coleman in a Week 1 win against the Buccaneers, Mostert moves up to second on the depth chart behind Matt Breida. Mostert carried the ball effectively for the 49ers, racking up 40 yards on 9 carries. Mostert had a decent 2018 that was cut short by an injury in Week 9, it will be interesting to see what he can do with an opportunity this season. Expect 8-12 carries for Mostert this weekend against the Bengals.

The 9th pick in the 2017 NFL draft has FINALLY arrived. Ross had a total of 210 yards last season for the Bengals, he had 158 Sunday… oh, and he scored twice. This could be the player that can change your fantasy season. Ross led the team in targets with 12, while teammate Tyler Boyd finished one behind with 11. It will be worth monitoring this duo when all-pro AJ Green makes his anticipated return by Week 7. For now, pick up, insert in your lineup, and enjoy!

With uncertainty surrounding Tyreek Hill’s injury, go grab the 56th pick in this year's draft, Mecole Hardman. The Georgia product only had one target this past Sunday in a win over the Jaguars. However, expect the rookie to have a big impact going forward in one of the most dangerous offenses in the league. If you are still in need of convincing, Hardman was on the field for 78% of the Chiefs snaps, expect to see that number increase going forward.

The second-year man out of LSU had a monster day this past Sunday in a loss to the Chiefs. Chark caught 4 passes for a whopping 146 yards and a touchdown. He finished tied for 5th on the team in targets (4) but made the most out of them. Chark is a big body who will certainly be in line for more targets going forward.

A rookie that should’ve been a late round pick in most leagues, especially 12+ team formats, was nothing short of spectacular in his debut. Catching 6 passes for 131 yards and a score in a tie against the Cardinals should have Hockenson very high on everyone’s radar in Week 1. Tied for second in targets (9) with Kenny Golladay, Hockensen appears to already have built a strong rapport with QB Matthew Stafford. For one of the first times in his career Stafford has solid weapons in each position, expect big things from the rookie tight end going forward.

The Hard Knocks favorite seems to have found his home with the Raiders after spending his first two seasons with the Ravens and last year on IR. Waller reeled in 7 catches on 8 targets for 70 yards in a Monday night win against the Broncos. With the Antonio Brown saga over in Oakland someone must catch passes. Look for the Raiders and head coach John Gruden to feature Waller a lot going forward.