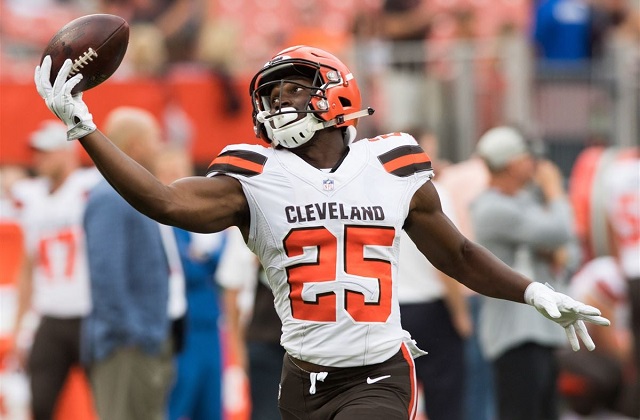 After the trade of Duke Johnson to the Texans I think it's time that we learn a bit about the running backs not named Kareem Hunt on the Browns’ roster.  Heck one of these guys might play a big role in Cleveland if Nick Chubb goes down.

Last season Dontrell Hilliard, the 5’11” 202lb undrafted rookie out of Tulane, saw action in 11 games. While he didn’t record any rushing attempts in the 58 offensive snaps, he did catch 9 of 10 balls for 105 yards. He also was trusted with kick returning duties averaging 24.0 yards per return.

While in college, Hillard saw action from the day he walked on campus and ended it as the Green Waves’ lead back in 2017. On so-so teams he was able to amass 2,948 yards rushing, 740 yards receiving and 34 total touchdowns.

So far this offseason Hilliard has been dealing with a hamstring injury limiting him to just 19 yards on 9 carries and 3 catches for 34 yards against Washington in week one of preseason with one fumble lost.

The other name of note on the Browns running back depth chart is 5’10” 208 LB running back D'Ernest Johnson. Who you may remember from this spring’s Alliance Football League experiment. The Orlando Apollos starting back was 3rd in the league in rushing (372 yards) over 8 games earning him an NFL look from the Browns alongside his former Apollos teammate QB Garrett Gilbert.

In college, Johnson was a four-year starter at South Florida ending as the Bulls career leader in all-purpose yards (4,186). In two preseason games, he’s rushed for 76 yards on 15 carried while gaining another 26 yards receiving. One of those receptions was a second quarter snag for a touchdown from his buddy Gilbert against the Colts in preseason Week 2.

The small sample size is tough to parse though but trading an excellent, though perhaps unhappy, pass catching running back has to be looked at as a positive for Hilliard. The Browns like this versatility. For Johnson, you have to like his chances of sticking on the roster at a minimum.