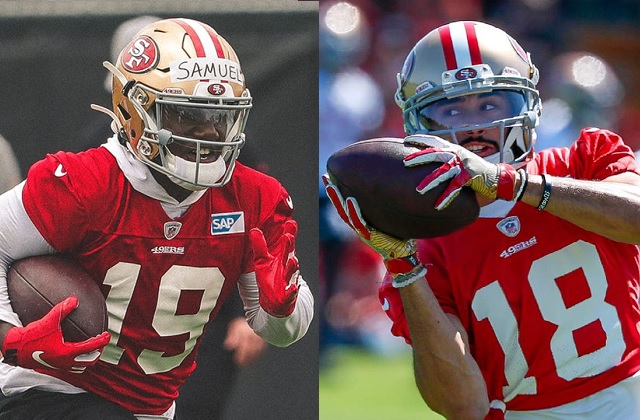 In the second round of the 2019 NFL Draft, the San Francisco 49ers selected Deebo Samuel, a wide receiver from South Carolina. Almost immediately, many fantasy analysists deemed that he would ascend to the #1 wide receiver in the Bay. Well, maybe, but not so fast. What about 2018 second round draft selection, Dante Pettis (Washington)? Let’s debate!

First, I want to look at the stats. Let’s start with Dante:

And now let’s take a look at Deebo:

So looking at both sets of statistics, we can see both are similar in receptions, yards, and average per catch. The first difference I notice is in number and consistency of games; Pettis was extremely consistent, never missing a collegiate contest, and Deebo played in only 29 games. If Deebo had played in more games, he clearly would have had better numbers. However, in South Carolina Deebo was often the only bright spot compared with Pettis who had to compete for targets on an overall highly talented team, consistently atop the Pac 12. Another difference is that Deebo was used more in the rushing game, as evidenced by his 25 career carries, which we will get to later.

Let’s talk film now, which I feel is the most important way to scout a player. Starting with Pettis, I see a tall lanky outside receiver that can take it to the house whenever he has the ball in his hands. As far as Deebo, I am actually more impressed with him as a player. There are times that he looks like a running back playing receiver. He has also shown he is versatile by lining up in various positions, including the back field.

How will this translate onto the field in San Francisco?  This is how I see it shaking out. I believe Pettis is the typical outside receiver, and he has the leg up on Deebo since he has a year in Head Coach Kyle Shanahan’s system. Deebo Samuel, to me, looks like an NFL slot receiver. He is slightly smaller than Pettis (5’11” compared to 6’1” for Pettis), and with his burst, would be effective in the slot and on sweeps, end-arounds and out of the backfield. I know pre-season darling Trent Taylor is there, as is speedster Marquise Goodwin, but Deebo and Dante are the two most talented of the receivers.

Can Jimmy Garoppolo support two wide receivers to make them fantasy relevant? I believe he can, as the running game doesn’t look to be as good as many people believe. Tevin Coleman and Jerrick McKinnon are better receivers than runners, and while Matt Breida is a great runner, he is oft injured and can’t be counted on. So yes, Garoppolo should be able to support more than one wide receiver because it might be out of necessity.

Here is Dante in his rookie season.

Here are some Deebo highlights.

Questions or Comments? Hit me up on Twitter @Thembower85 and make sure you check out the Dynasty Rewind Podcast if you want to hear more of my fantasy analysis.