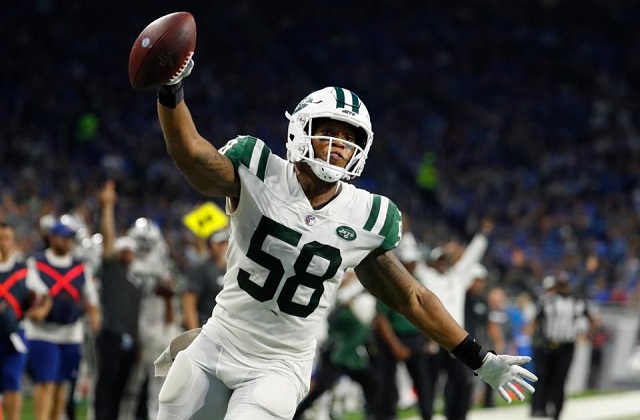 The linebacker is the heart and soul of a defense, and in a similar respect, your IDP (Individual Defensive Player) roster. LB’s are great because they are always on the field, they gets sacks and tackles for a loss, but also pass deflections and interceptions. My personal IDP strategy is to go LB heavy and grab one or 2 studs in other positions. So what can you do if you need LB help and it appears none are available? Let’s look at some LB’s that have switched teams and may be available at a discount.

After serving a 4 game suspension in 2018 for substance abuse, new Jet’s General Manger and confirmed lunatic Adam Gase decided to ship former 2016 1st round draft selection (20th overall) Darron Lee to Kansas City. This move should translate well for Lee, as he is now on a Super Bowl contending team as opposed to one that appears to be mired in being ok with mediocrity. In KC, Lee is currently not locked in as a starter as he is slated at the WILL position behind former Cowboy Anthony Hitchens. However, Lee should feel at home in Steve Spagnuolo’s 4-3 scheme, and realistically can also play MLB, which is currently held down by Reggie Ragland. While not the most physically imposing LB at 6’1”, Lee is quite the athletic specimen and can cover extremely well for a linebacker, as evidenced by his 3 interceptions in 2018. Try to pick him up for a late pick or lesser starting LB, as I fully expect him to become a starter at some point this season.

For what it’s worth, I feel the Jets will still be in a good position at LB with newly signed CJ Mosley and 2nd year stud Avery Williamson. What I disagree with is unloading Lee for only a 6th round pick. Could moves like this, and speaking negatively about the contracts of Free Agents start the end of the Gase Era in New York? Time will tell.

While the Chip Kelly era was a dark time for Philadelphians, there were some solid draft picks made during that time, one being former 3rd round selection (84th overall), Jordan Hicks. What is he as a player? Solid, steady, never out of place. What isn’t he? A picture of health, playing only 43 out of a possible 64 games in his career. Philadelphia decided to move on and bring in former Washington LB Zach Brown (more on him later). Hicks should be well suited to play in Arizona, as the Air Raid offense should keep the defense on the field a great deal, much like his earlier time in Philadelphia. If, IF, Hicks can stay healthy, and with all the time he will see on the field, he has the potential to see a top 10 season.

My one concern is that he is switching defensive schemes. In Philadelphia under Defensive Coordinator Jim Schwartz, Hicks played in a 4-3 scheme. In Arizona, under new Defensive Coordinator Vance Joseph, they will play an “attacking 3-4” style. He is on the smaller side and not 100% suited for ILB in a 3-4, but the Cardinals did sign Terrell Suggs to take some pressure off, and he has played in a similar scheme in Philadelphia- the “4-3 under”, led by former Coordinator Billy Davis. Buy now while he is still cheap enough.

I’m sure at this point, the Washington Redskins are kicking themselves for letting Brown go after Reuben Foster suffered a season ending injury in OTA’s. Cast off from 3 different teams, (Tennessee, Buffalo and Washington), Brown has an opportunity to make a significant impact in Philadelphia replacing the aforementioned Jordan Hicks. With Hicks in Arizona, the only other linebacker of note on the roster is Nigel Bradham. Philadelphia likes to play in 2 LB sets, so for periods of time Brown and Bradham will be the only men in the middle, meaning more chances for points. Brown has been fairly healthy throughout his career, missing 15 games in 2014 (torn pectoral) but only 3 other games besides that. As he is an 8 year veteran, many Dynasty players may not value him highly, but he can be a solid LB2 for your squad.

While Brown has a fairly clean injury history, he did play through a torn oblique that plagued him throughout 2018. If you like to handcuff, undrafted LB TJ Edwards would be an interesting piece to hold for the future, as in reality Philadelphia’s LB corps is aging.

In conclusion, don’t be that guy or gal that plays in an IDP league and de-values defensive players. Use some knowledge and take flyers on mid-risk/high upside players like these three. And if you don’t play IDP, it’s time to level up.

Questions? Comments? Find me on Twitter @Thembower85 and make sure you catch the Dynasty Rewind, available on all major podcasting platforms!