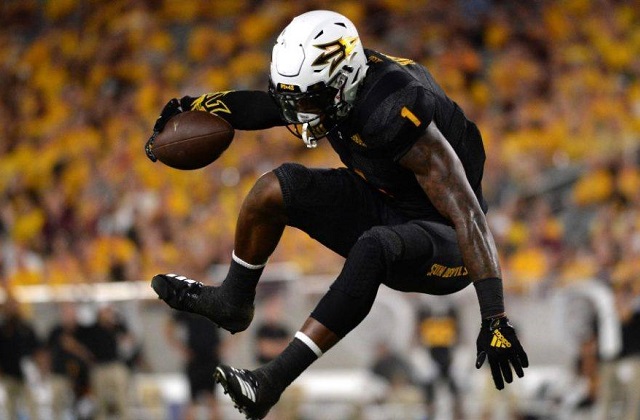 Chances are, if you have the 1.01 in your dynasty league, you have heard the name N’Keal Harry over and over again. Is he worth the 1.01? Many people seem to think so, but why? There is a possibility he is not even a first round NFL draft pick, so should he be your 1.01? Let’s have a look.

Standing 6’2” and weighing 228 lbs, he is everything D.K. Metcalf wishes that he was. N’Keal has size, speed, strength and good lateral movement coupled with elusiveness. He is not a one-trick pony. Running a 4.53 40-yard dash and putting up 27 reps on the bench (250 lbs) at the Scouting Combine, he showed that he can move and has the size and strength to get defenders out of the way. If you watch his tape, you can see he can burst towards the end zone on one of the many bubble screens he runs, as well as on punt returns. You can watch some N’Keal highlights here.


N’Keal’s statistics may not be eye popping, and neither is his average per reception, but that may be the result of too many backwards screens. This will have to be corrected by his NFL coaches, as they will ask him to use his big size and speed, pick a direction and just go. At times, he also tends to stutter step excessively before running his route, which will not fool NFL defenders. With his speed and lateral movement ability, I am surprised that Arizona State did not use him in the run game more, although he was used to some extent.


As we can see from his rushing statistics, it was either boom or bust at times, although averaging 6.3 yards on 23 attempts isn’t anything to scoff at. He can also be used in the punt return game, as in his final season he had 9 returns for 152 yards (16.9 average) and 1 touchdown. In addition to him rushing, N’Keal is also a willing run blocker, although he will need to clean up his hand work on blocks or he will be flagged in the NFL.

So whether we see N’Keal Harry jumping up and hauling in contested catches, bubble screening a team to death, running an insane punt return, or making a 1-handed OBJ style catch in the corner of the end zone, N’Keal seems to be a safe pick, with a high floor and a super high ceiling. If faced with the 1.01, I would still personally take AJ Brown (sorry, he is my man crush at the moment), but if I were picking 1.02 or 1.02 and AJ was gone, I would happily snag N’Keal.