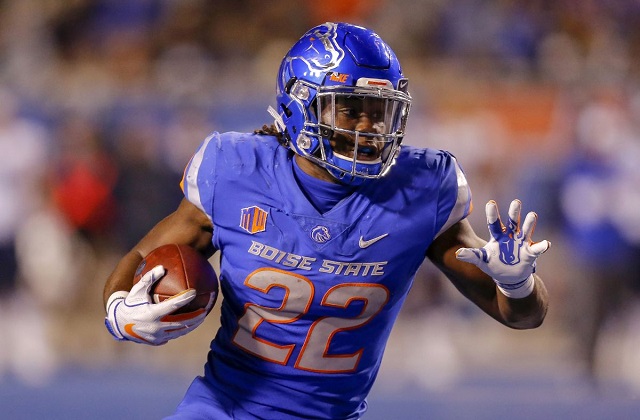 I should clarify that in the title of this article, I am referring to “bad” as the way Boise State RB Alexander Mattison plays, not how he is in real life - "Bad", as in "bad-ass", not terrible! After hearing about him (and admittedly not knowing anything about him at first), from my friend Garret (@Dynastyprice on the Twitter), I decided to look at some film. I was not disappointed, so buckle in and watch where he lands on draft weekend!

Standing at 5’11” and weighing in at 221 lbs, Mattison reminds me of an old school grinder that just gets better as the game goes on. However, unlike the typical wear-em-down back, Mattison has great quickness and lateral moves to make defenders miss. He isn’t like other backs that thrive running to the outside and look to bounce every run there, he is more than willing and capable of being a between the tackles runner. At the combine, he put in a respectable 4.67 second 40-yard dash, 22 reps on the bench press, a 7.13 second cone drill and a 4.29 second 20-yard shuffle. Although his 40 time may not be blazing fast, we can see his lateral agility is there, and on tape he appears to be much faster than his 40 time would indicate. Like any running back, production is key so let’s take a look at the stats:

Although used sparingly, Mattison also proved he could be somewhat of a factor as a receiver.

I am absolutely on-board with Mattison becoming a member of my Dynasty team, although I do have some concerns with his transition to the NFL. While he has a tendency to wear out opponents as the games goes on, he can get somewhat lost early in games until he hits a big run before pounding the defense. My concern is that if he lands with an impatient head coach who always cites “game flow” as a reason why he didn’t use a player, he could easily become lost in the shuffle if not productive on early downs.

Another concern is the level of competition he faced on a weekly basis. Playing in the Mountain West Conference, many of the defenses were poor, and some of the non-conference teams they played were also poor defensively. I listed the defensive rankings of some teams that Boise State went up against in 2018: Troy - 28th, Connecticut - 130th, Oklahoma State - 97th, Colorado State -117th, Air Force - 56th and New Mexico - 113th. Although they did play Fresno State - 3rd, and won, in which Mattison carried the ball 30 times for 144 yards and 2 touchdowns, accompanied with 3 catches for 15 yards. But a 3rd ranked collegiate defense is much different than even a 15th ranked NFL defense, so the question remains can he make the adjustment?

You can watch some of his highlights here https://www.youtube.com/watch?v=s3AlqkCnrJw

In conclusion, I feel Mattison has the potential to be a valuable asset to an NFL franchise and for fantasy if given the right opportunity. He needs to go to a team with a clear shot with aging or less desirable starters (Oakland, Buffalo).

Questions? Comments? Hit me up on Twitter @Thembower85. And if you are interested, my friend Garret (@DynastyPrice) did a Dynasty podcast, and you can say you listened to the first ever episode! You can find it here if you are so inclined http://cast.rocks/hosting/17865/Practice-Pod-0.mp3