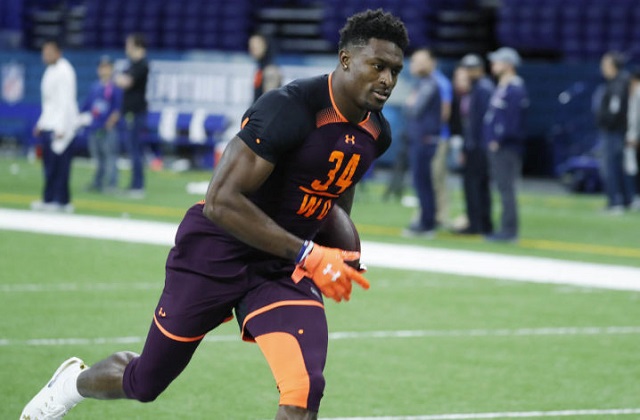 Why I’m not drinking the DK Metcalf Kool-Aid

Below is a blind combine result from Metcalf, three receivers currently in the NFL, and one who hasn’t made a roster since 2015.

Let’s start with WR3, this is who I have heard the most comparisons to during the combine so far. Both ran a sub 4.4 40-yard dash. Metcalf outperformed WR3 by 10 reps on the bench press. Even their height, weight, and hand sizes are almost the same. If you didn’t catch the comparisons, WR3 is Julio Jones.

So, what’s the difference? Well, there is a noticeable discrepancy between Metcalf 3 cone and 20-yard shuttle times. Not many people ran the 60-yard shuttle this year, and in Metcalf’s case, that’s probably for the better. Now the point of these drills is for scouts to see a player’s agility and ability to change direction… hint hint, you need to be able to do those to uh, run routes.

WR2 is probably my favorite comparison, not because they are similar in anyway, but because Metcalf dominates all physical aspects, except for agility. WR3 had much better times in the 3 cone and 20-yard… see early comment about route running, notice a theme here?

WR2 is none other than Odell Beckham Jr. The superstar didn’t get an incredible grade at the combine, ran an impressive, but not insane 40 time (4th overall WR), put up less bench reps than I can, and out of this sample, had by far the lowest broad jump. So what makes Odell, Odell? Probably something to do with those agility drills.

WR4 I put in here because he probably has the worst grades out of everyone sampled but had proven the ability to make crazy catches and run routes. WR4 is Michael Thomas. He did not put on a crazy show and was the lowest graded out of all the WRs listed. But again, look at his 3 cone and 20-yard shuttle… not sure if I mentioned it yet… never mind, I’ll spare you.

When I was thinking about this comparison, I really sat down and was like “wow, DK Metcalf is literally a faster **** (WR1).” Now as a Browns fan, I remember the horror of watching balls go right through WR1’s hands for three straight seasons. So, I looked up his combine results and what do you know, oddly similar to Metcalf’s. You guessed it, this combine phenom is none other than Greg Little. Oh you don’t remember Greg Little? Shame, real shame. He’s a physical freak, standing 6’3, weighing 220, throwing up 27 reps on the bench, jumping 40.5 inches on the vert… but man, that dude can’t run a route or catch a ball to save his life.

Now I don’t dislike Metcalf, he has a lot of potential to be a star in the league. His weaknesses, in my opinion, are his agility… really need that to run routes, and his hands… so two big parts of playing receiver. My Grandpa always said “I don’t understand what these guys see from the combine, you don’t play football in shorts.”