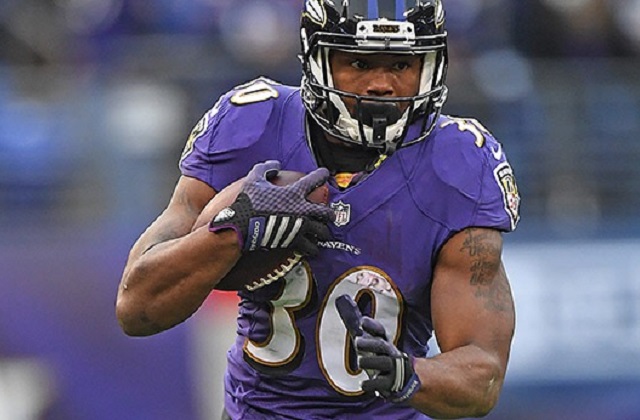 We're getting to the point in the season where, most guys on the wire are crap shoots each week, so I've picked a few players that look to be getting more playing time going forward and a wide receiver that I've mentioned before.

Dixon our gained Gus Edwards on Sunday 80 yards to 67 yards. Dixon also had a TD on the day. Coach John Harbaugh said Monday said he expected for Dixon’s role to grow going forward. Dixon has always been heaped with praise from this coaching staff, yet it’s never been shown due to injuries. Dixon is only owned in three percent of ESPN leagues and if you’re looking for RB help he’s worth the add.

Williams May have been our rushed and out-gained through the air by Spencer Ware, yet Williams had a TD in both categories. I think Andy Reid starts to mix him in more. I fully expect this to be an RBBC going forward. Which could hurt your Ware shares if you’re in the playoffs. I’m looking to add Williams as a handcuff or even an RB3. Williams is only owned in 14 percent of ESPN leagues, looked to scoop him up even if it’s to block a playoff team.

I said it last week, you should go out and pick up Pettis he has a good matchup. He was pretty quiet the first half of the game but ended the game with three receptions for 49 yards and a TD. That makes it three straight games with a TD. With Pierre Garçon going on IR, it’s Pettis and Marquise Goodwin as the top two receivers. Pettis was second for targets behind George Kittle on Sunday, as Kittle had nine and Pettis had seven. If you're in still in the playoffs, grab Pettis now, as he’s only owned in 20 percent of ESPN leagues.

With Emmanuel Sanders out for the year with a torn Achilles, Hamilton looks to take on a bigger role. His seven catch for 47 yards and a TD showed that he can take the bigger role. With Hamilton being owned in less than 95 percent of ESPN leagues, it stands a chance that he’s available to help your team going forward.