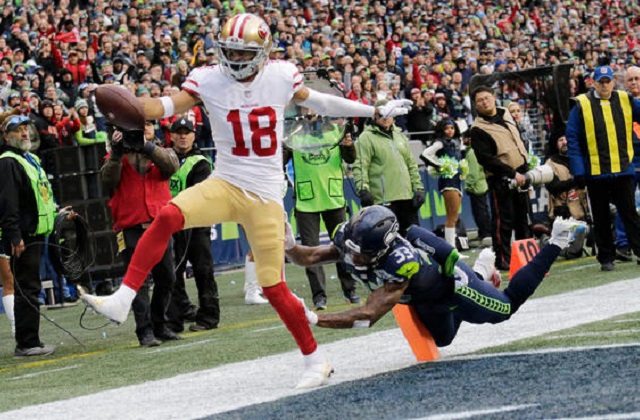 I've written about Humphries before, and he has proven me right again scoring a TD in his last three games and scored five times during his last five games. Yet Humphries is only owned in 41 percent if ESPN leagues currently. Humphries could be the surprise wire pick up that wins you a championship.

Even if James Conners leg Injury isn’t all that serious, the Steelers could look to rest him before a stretch playoff run. If you roster Conner and didn’t handcuff him with Samuels in previous weeks, you might be up the creek without a paddle. Samuels could add a great depth to your playoff squad, though it may only be for Week 14, I’m looking to roster him. Samuels is currently available in 96 percent of ESPN leagues.

With Matt Breida already declared out, it looks to be the Jeff Wilson show at running back. Alfred Morris has been a healthy scratch the last two weeks, which shows the confidence Kyle Shanahan has in Wilson. Wilson has a leg up on Morris with good pass catching skills. Wilson caught eight passes Sunday which is two more than Morris has had all season. Wilson is available in 100 percent of ESPN leagues right now.

Pettis has TD catches in back to back games, catching two more on Sunday. With Pierre Garçon and Marquise Goodwin sidelined, Pettis has operated as Nick Mullens WR1, only being out targeted by George Kittle. With Denver losing Chris Harris for the foreseeable future, Pettis should payoff again next week also. Pettis would also be a great dynasty stash if he’s not already claimed. Look in your ESPN leagues as Pettis is available in 98 percent of leagues.

Jones could be a sneaky pick up as Josh Allen seems to have clicked with him. Allen connected to Jones for two TDs on Sunday. He may only be a WR3 or four on your bench, but he could help you by not helping another playoff team. Jones is available in 92 percent of ESPN leagues currently.