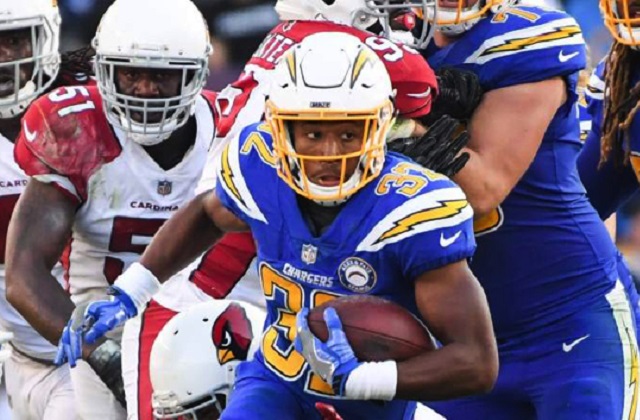 As we saw Sunday, Melvin Gordon went down with an MCL Injury. What we most expected was Ekeler to be the lead back in his absence, but it was Jackson who out-touched Ekeler seven to five. Though Ekeler did see 11 targets catching 10 for 68 yards. I don’t know who will be the lead back going forward, but I’m putting waivers in for both. Jackson is owned in less than one percent of ESPN leagues while Ekeler is owned in just under 55 percent. If you’re a Gordon owner you need to try and get one.

Not saying Todd Gurley is going to miss time, but he did have an injury going into their bye week. If you’re a Gurley owner I would be putting a claim in on Brown. When the Rams have been up, we’ve seen them rest Gurley and Brown be the guy out there. Brown is currently available in 92 percent of ESPN leagues.

Ezekiel Elliott has a hip injury that hampered him a little bit in practice, said to be nothing major as he was back to a full practice. If you’re worried or making a playoff run, look to stash Rod Smith. He’s only owned in one percent of ESPN leagues.

Most experts didn’t see Phillip Lindsay being the lead back in Denver, they saw Freeman owning that job. But if something was too happen in that backfield I think Freeman would get first shot at being the lead back. If you own Lindsay go out and see if you can grab Freeman, being that he’s already owned in 47 percent of ESPN leagues.

Leonard Fournette is suspended for Week 13, and we know that he has been injury riddlers this year. The Jaguars went and traded for Hyde before the deadline. Now is his time to shine. Hyde has been dropped in a lot of leagues and he’s only owned in 39 percent of ESPN leagues currently. If you’re a Fournette owner try and grab him as a safety blanket and a backup for this weekend.