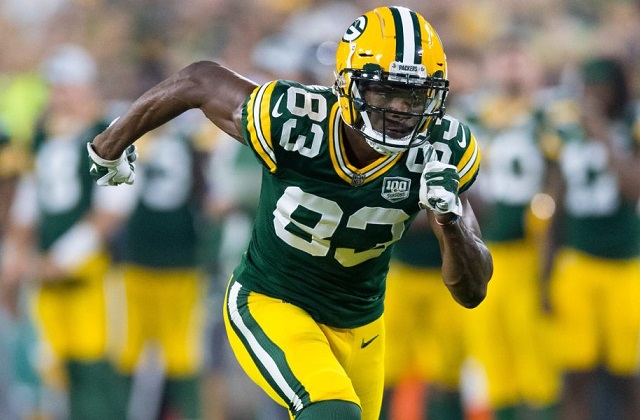 The Packers have not been good this year and it came unraveled Sunday night against Minnesota, when Aaron Rodgers failed to top 200 yards passing. Marquez Valdes-Scantling's production was directly effected by the offensive line's struggles and Rodgers unwillingness to get rid of the ball quickly. Despite the stinkers the past couple weeks from MVS he is a KEEP this week. Their schedule eases up a bit as the whole franchise will be in desperation mode the rest of season.

Devin Fuchess sat out Week 12 from a back injury and is still questionable for Week 13. Even without the injuries Fuchess has not hada fantasy relevant game since Week 7. Rookie receiver, D.J. Moore as seen an up tick in usage as well as the resurgence of Curtis Samuel. CUT Funchess with no fear, there are better options for your bench.

It has been a disappointing season for hopeful Trey Burton owners. He showed signs of promise early but Matt Nagy and the Bears have used a lot of moving parts in this offense. It seems they want to use their players with speed to spread the defenses out, hence the down fall of Burton and teammate Jordan Howard. CUT Burton if you can find a Cameron Brate, Gerald Everett type on waivers.

We know the Bucs QB situation has not been great and with so many pass catchers on the Bucs DeSean Jackson's use has seen a major decline. The magic seems to have wore off so CUT Jackson who's floor is just to low to keep around for the playoffs.

I almost mentioned Spencer Ware last week but I was hoping to get through their bye week first. Ware is a top handcuff in an obviously great offense. If there are guys on the end of your bench that you aren't going to use down the stretch you need Ware and players like him who can drastically change your team in an instant. ACQUIRE Ware who would be a RB 1 should Hunt get nicked up or rest at the end of the season.

Gerald Everett is a streaming option for fantasy owners looking for more production from the tight end spot. Since the Cooper Kupp injury, Everett has three touchdowns in two weeks and looked like a match up nightmare against Kansas City last week. ACQUIRE Everett and get your piece of this historicly great offense.