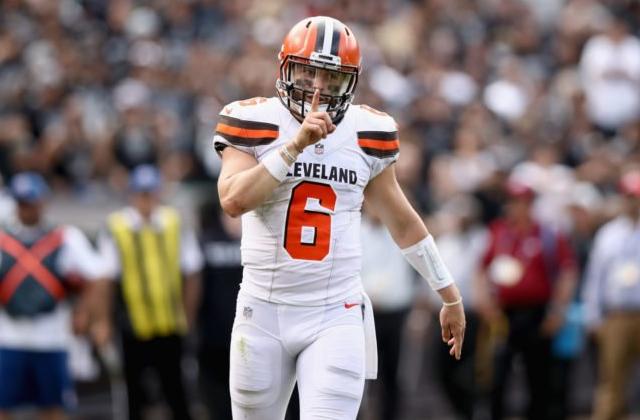 Start and Sits for Week 12

Mayfield has quietly been putting together an impressive rookie season. He’s been especially consistent, as well, throwing at least two touchdowns in each of the last four games, averaging 18.8 fantasy points per game in that stretch. The cherry on top this week will be the opponent, the Bengals. Cincinnati is 31stin the league allowing 23.2 fantasy points per game to opposing quarterbacks. If you have to fill the hole of Mahomes or Goff, Mayfield is the perfect streaming option this week.

The Falcons will be in for a high-scoring battle in New Orleans on Thanksgiving night. The flow of the game could dictate a lot of action for Tevin Coleman who's been coming on strong of late. In his last five games, he’s averaged 16.1 fantasy points per game. The Saints have been stingy against the run, but that has a lot to do with the fact that teams simply have to abandon the run to keep up with the Saints’ offense. Coleman will heavily be involved in the passing game which will provide excellent fantasy value for his owners.

Smith is rapidly becoming the perfect complement to both Michael Thomas and Alvin Kamara. Defenses simply can’t account for that many weapons, and the Thomas/Kamara combo have earned the right to receive the most attention. For that reason, Smith is the perfect candidate to explode any given week. After a blow-up 31.7 fantasy point performance last week, and Atlanta sporting the league’s 5thworst defense against fantasy receivers. I’m firing up Smith again this week.

When you create a start/sit list, it’s only natural to pair a WR/TE with the quarterback you’re starting. That’s what I’m doing here. When healthy, Njoku has been very good this season and got off to a hot start with Mayfield. In their first four full games together (Weeks 4-7), he averaged 14.2 fantasy points per game. Dealing with some injuries in the following weeks, he struggled to maintain that fantasy output, but the matchup this week is excellent. The Bengals have been one of the league’s worst against opposing fantasy tight ends, allowing 9.5 fantasy points per game.

Maybe Father Time is finally taking Brady for his own, or maybe the Patriots offense is finally being figured out by defensive coordinators. Whatever the reason, Brady has been virtually ineffective the last three games against some of the league’s best passing defenses. In those three games, he’s averaging just 13.8 fantasy points per game. With a healthy Sony Michel this week, you may see the Patriots try to attack the Jets on the ground where they’ve been more susceptible on defense.

This certainly is not a flashy sit, as Carson isn’t among the league’s best fantasy performers at the running back position. But, it is a position that gets murkier by the week. Carson does provide a comfort because you know when he’s healthy, he gets plenty of touches. However, in his last three games, he’s failed to reach the opponent’s “fantasy points allowed” average, and he has a tough matchup with a stingy Carolina run defense this week, ranked 8thin the NFL against the position in fantasy football.

Landry has been one of the most disappointing players in fantasy football this season. Especially in PPR leagues (which I base this weekly piece on PPR formats), he’s been an excellent in his career, averaging exactly 100 receptions in his first four years. He’s been PPR gold. This year has been much different. He’s only on pace to reach roughly 90 catches for 900 yards and 3 scores. Not worthy of the likely 3rd/4thround selection you used to take him. In addition, his last three games have been horrid, averaging 9.0 fantasy points per game.

This appears to be the “easy” choice here. Gronkowski has missed the last two games, and is clearly not fully healthy. But, he is likely to play this weekend and is generally a matchup-proof must-start anytime he plays. Not this week. He hasn’t been as dominant this season as he’s been throughout his career. The Jets are 4thin the NFL allowing just 4.9 fantasy points per game to the tight end position; Gronkowski hasn’t caught a touchdown pass since Week 1, and I expect that trend to continue.