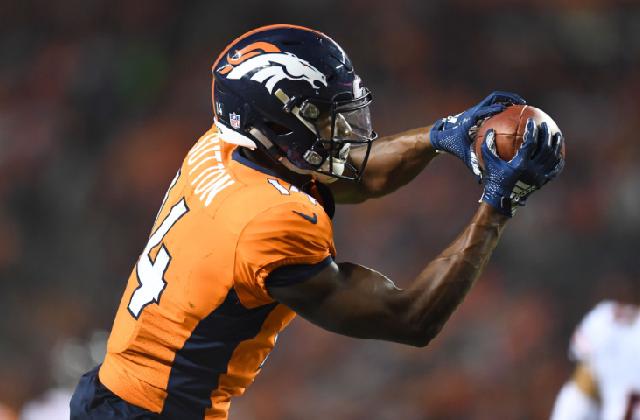 Since taking over the starting role in Denver, Courtland Sutton has not broken out quite yet. In two games he has averaged 3 catches and 65 yards per game with the bye week sandwhiched in. This past Sunday was a tough corner back match-up but he still managed 78 yards in the air. The Broncos in Weeks 12-16 they will play Pittsburgh, Cincinnati, San Francisco, Cleveland and Oakland. KEEP Sutton who will be a WR3/flex option from here on out.

Even with Joe Flacco, Micheal Crabtree has failed to top 10.00 points since Week 6. Lamar Jackson will start again this coming week and that does not bode well for Crabtree's use. In the Lamar Jackson package through out this year the only time the Ravens play outside the numbers is a run that bounces to the outside. As defenses creep towards the line of scrimmage there will be more opportunity for John Brown to see looks down the deep middle of the field but outside of Brown, who is a long shot, there won't be much fantasy production. CUT Crabtree and look for a higher upside guy for the playoffs.

The Eagles are struggling as a football team collectively but the only running back to show flashes in the ground game is Josh Adams. The Eagles know they have to be able to run the ball to get the offense flowing and Josh Adams will be the guy they look to down the stretch of this season. ACQUIRE Josh Adams who is averaging 6.6 yards per carry on 55% of the snaps.

Per usual the mediocre Lions will play on Thanksgiving and in a short week Kerryon Johnson will not play with a sprained knee. Wide receiver Marvin Jones is also banged up and as we know Golden Tate is now in Philly. Theo Riddick was already seeing his snaps increase at receiver with Tate gone and now with Johnson out this could very well turn in to the Theo Riddick show against a Bears do who can absolutely get after the quearterback. ACQUIRE Riddick as a great ppr flex option this week.