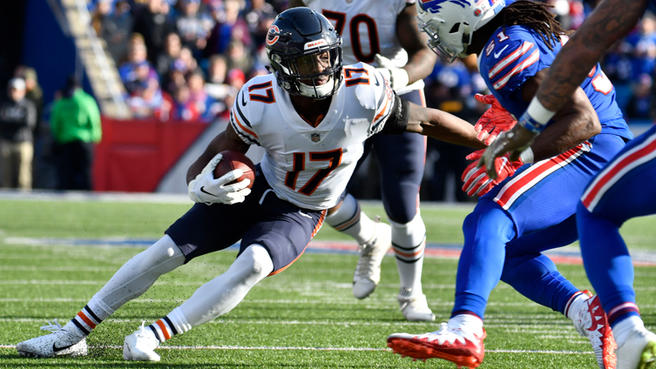 In ppr leagues, Miller has been pretty decent WR4 for your team. This week he really came to life, catching five balls for 122 yards and a TD. He was second on the team for targets with six behind only Allen Robinson, who had eight targets. With Mitchell Trubisky seemingly coming to life each week the season progresses, it looks good for the first round rookie. His upcoming couple of games aren't the best games to roll him out, but Weeks 14-16 look pretty good with the Rams, Packers, and Niners on the schedule, all who rank pretty bad against WRs for fantasy purposes. Miller is owned in less than 15 percent of ESPN leagues.

Smith has stepped up the last two weeks, grabbing a touchdown and having more than 30-yards in each contest. Marcus Mariota is looking for that safety blanket he had with Delanie Walker before he went down with an injury. If Smith and Mariota can grow together, this could work out in everyone's favor. Smith is a decent athlete and can help this offense out a ton. Smith is currently only owned in less than one percent of ESPN leagues. Grab him as a bench stash that could turn out in your favor or add him if you've been dealing with Rob Gronkowski being out these last few weeks.

Penny looked like the back they drafted, Pete Carroll said on Sunday after the game. Averaging nine yards per carry, Penny had a 108-yard day on 12 attempts adding a TD also. Maybe he lost a little weight and has his burst and agility back, or Chris Carson could be back next week and Penny could ride the pine again. If I'm looking for a back to add to my bench and maybe start going forward, it's Penny, as he's only owned in 13 percent of ESPN leagues.

Doctson has slowly been coming on, with injuries all around him, he's finding the opportunities to get open and catch the ball. This is his weekly point total in PPR leagues from Week 6-10; 5,7,9,12,14. Week 9 and 10 he scored TDs. Yet, he's owned in less than 20 percent of leagues. You should change that. Doctson has all the ability to take the WR1 over for this team, Alex Smith just needs to pepper him with targets.

With Cooper Kupp out for the season with a torn ACL, Reynolds looks like he could be the benefactor. Reynolds has shown in Week 8 what he can do when given a chance going 3/42/2.

With James Conner in the concussion protocol and LeVeon Bell not expected to join the team, Samuels is the next man up. If you are a playoff bound team and own Conner, it makes sense to grab Samuels.