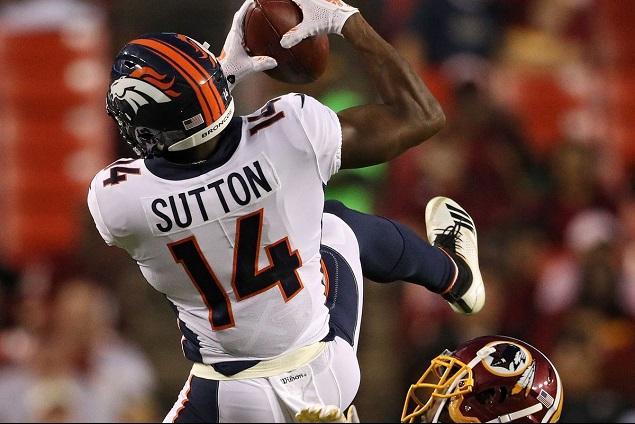 The Cincinnati Bengals as a whole, including Uzomah, are banged up. Uzomah injured his shoulder early in Sunday's game versus Tampa Bay, and he stalled along with the Bengals' offense, which failed to pick up a first down in the second half until their final drive. Going into a bye week, Uzomah is a KEEP in all formats given how generally awful the TE position has been in fantasy and the fact that Uzomah is still a reliable target for Andy Dalton.

Hyde started the game in London for the Jaguars but was ineffective, receiving only six rushing attempts and two targets. However, I would KEEP Hyde through the bye based on his talent and Leonard Fournette's injury situation. Fournette is expected back after the bye, but the Jaguars' acquisition of Hyde tells me they don't fully trust Fournette to be able to carry a full workload for the rest of the season.

Nelson's fantasy owners were hopeful following last week's trade of Amari Cooper, but the former Packer came out of Sunday with just one catch on four targets for 14 yards. He has been a non-factor with the Raiders and was out-snapped by none other than Brandon LaFell during Sunday's high-scoring contest against the Colts. You can CUT Nelson.

Since coming back from a preseason injury, Baldwin has let down his fantasy owners in a big way. Recently, Baldwin said he is still not 100 percent healthy and will likely be playing like that for the rest of the season. The Seahawks have adjusted to a run-first offense and are going with younger receivers who can get open off of play action. CUT Baldwin since there are higher-upside wideout options available.

Just when we thought Parker's Dolphins career was over, he goes and totally redeems himself. Thanks to injuries to Albert Wilson and Kenny Stills, Parker finally got a chance against Houston on Thursday night and hauled in six of nine targets for 134 yards. Things looked like they were finally going Parker's way, especially when he was credited with a 46-yard reception on a pass that deflected off of two players. But besides the numbers, Parker looked like the talented receiver experts have always claimed him to be. I don't know what got into head coach Adam Gase last week, but he finally decided to use his two most skilled offensive players -- Parker and Kenyan Drake -- to the Dolphins' advantage. ACQUIRE the former first-round wide receiver, who has big upside if the Dolphins are willing to use him.

With Demaryius Thomas getting dealt to the Texans on Tuesday and Emmanuel Sanders nursing a bit of a shoulder injury, the time is now for Sutton. The rookie has displayed his promising talent in limited opportunities this season. ACQUIRE Sutton, who has WR1 or WR2 upside now that Thomas is gone.