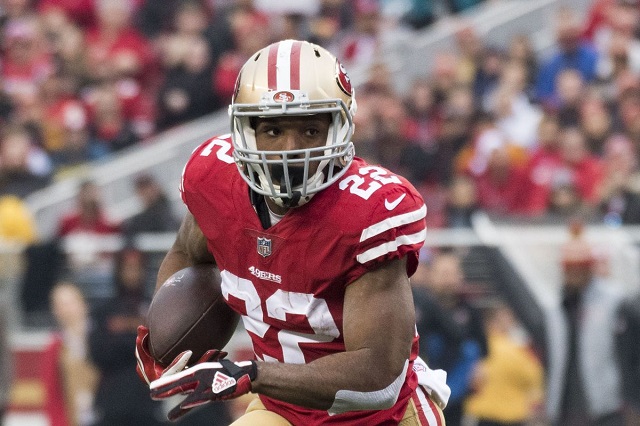 ’s start with a star-crossed team that has caught my attention ...

-- The San Francisco 49ers have had some terrible injury luck this year. RB Jerick McKinnon and QB Jimmy Garoppolo are out for the season, and WRs Marquise Goodwin and Dante Pettis have missed significant time so far. Now RB Matt Breida has an ankle injury and could miss a few weeks of action. Alfred Morris is poised to step in for him and should have success this week against Green Bay. However, I am not sure Morris or even Breida should feel comfortable that they are San Fran's answer at running back for the rest of the season. The 49ers got a look at several backs this week, including Shane Vereen, Charcandrick West, Matt Dayes  Andre Ellington. They didn't sign any of them on the spot, but if they do sign Ellington in particular at some point, I think you should take a good look at him. He can possess a portion of the PPR value that McKinnon was supposed to have into 2018. In three of the past five seasons, Ellington has seen at least 57 targets and recorded at least 39 receptions. Morris, at 225 pounds, is your traditional inside runner. Ellington, at 5-foot-9, 200 pounds, has a running style and the playmaking ability similar to the 5-foot-9, 208-pound McKinnon. If indeed signed, Ellington would be a recommended add in deeper PPR formats.

-- If you’re looking for a tiebreaker between who to start in your lineups, Vegas can provide some helpful hints. There are four games this week currently projected to have more than 50 total points: Steelers-Bengals, 52.5; Buccaneers-Falcons, 57.5; Rams-Broncos, 52.5; Chiefs-Patriots, 59.5. High projected point totals can be a sign of forthcoming fantasy production. And Vegas seems to know what it's talking about; over the past two weeks, seven of the nine games projected to reach at least 50 total points did so.

-- Eagles RB Jay Ajayi has a torn ACL and is out for the season.  Corey Clement and Wendell Smallwood should form some kind of committee attack. RB Darren Sproles would be third in that committee once he returns from his hamstring ailment. Efforts are reportedly being made to bring RB LeSean McCoy back to Philly. Right now, I would rather have Clement over Smallwood, but you didn't spend too much of your FAAB money on either one.

-- Falcons RB Devonta Freeman is now dealing with a bone bruise in a foot, and there is reportedly some question as to whether he will suit up in Week 6 versus the Bucs. It's been a tough year for Freeman, who returned in Week 5 following a three-week absence due to a knee sprain. If he is inactive yet again, Tevin Coleman would pop back onto the RB2 radar. Tampa Bay has been generous to opposing backs thus far.

-- Vikings RB Dalvin Cook is trending in the right direction after missing two of the last three games due to a hamstring injury. While we can't rule out the possibility of another aggravation with his kind of soft-tissue injury, Cook will be a worthy RB2 play if he's good to go in full against the Cardinals.

-- Panthers TE Greg Olsen is set to play for the first time since Week 1. He needs foot surgery, but he will tough it out until the offseason. I know it might be tempting to use him versus the Redskins this Sunday, but as of Thursday morning, I have Olsen set at No. 15 in my tight end rankings.

-- In encouraging news, TE Austin Seferian-Jenkins is on IR with a core muscle injury. For fantasy football purposes, he is out for the rest of the year. The benefactor of this is TE Niles Paul, who seemed to have some chemistry with QB Blake Bortles as he caught seven of nine targets for 65 yards last week. I think that continues.

-- Week 6 sends two teams on bye: Detroit and New Orleans. So, Matthew Stafford, Marvin Jones, Golden Tate, Kenny Golladay, among others, should not be in your lineups. Same goes for Drew Brees, Michael Thomas, Mark Ingram or Alvin Kamara. As usual, prepare accordingly. It is highly recommended that you prepare for bye weeks in advance. This is even more crucial considering that at least four teams will be idle each week from Weeks 7 through 11.

-- I'll finish with some general wisdom: "Beware of the tongue in a wet place for it might slip when moving fast." Meant to warn you against being a fast talker and/or forgetting to listen during conversations. I'm not going to link it to football; I just love the saying!