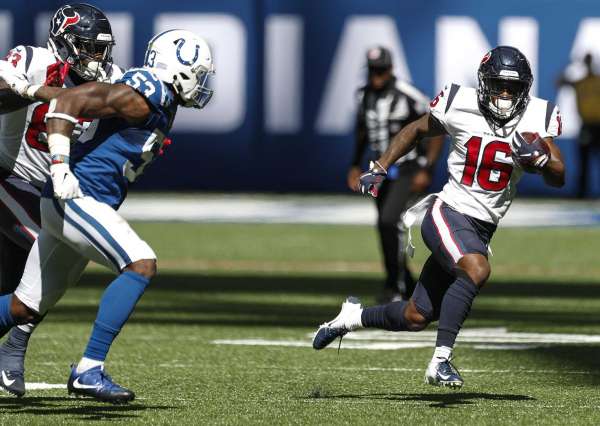 ASL's Levi Andrew gives you the top wire adds for Week 6. They could either make an impact in your starting lineup or be a nice bench stash

you happen to roster one of these guys, let us know on our Twitter: @Advsportslogic.

Higgins and QB Baker Mayfield have found a connection. Mayfield has targeted him 12 times in their span of about nine quarters on the field together since Mayfield took over under center in Week 3. It has benefited the third-year receiver as he’s turned those targets into 10 catches for 159 yards and a TD. It looks like he is slowly becoming the No. 2 wideout on the Browns, so let's hope the knee injury that forced him to miss the end of Sunday's win over Baltimore isn't serious. If you play in PPR leagues, Higgins is a WR3 with upside and currently owned in less than 1 percent of ESPN leagues. I’m jumping on him in most of my leagues, and you should also

Coutee continued his high play again this week, catching six of his seven targets for 51 yards and a touchdown. Perhaps more telling is he out-targeted Will Fuller in this game, 7-3. Coutee may become a good WR3 for your fantasy team. He is owned in fewer than 20 percent of ESPN leagues. Don’t be late to this party; I’ve already written about him twice.

I’m throwing Hines in here again because he is still available in about 60 percent of ESPN leagues still. After his Thursday night showing -- 15 carries and seven receptions for a total of 90 yards -- I’m sure that number will rise. He has now been targeted 20 times in the past two weeks and has garnered 19 more touches than Jordan Wilkins during that span. You better jump on him in your league if he’s available because he will be a mid-range RB2 if he continues seeing this much work.

I’ve written about Kirk before, yet his ownership is still barely 10 percent in ESPN leagues. Kirk had a good showing on Sunday, catching three of his four targets for 85 yards and a score. Week 4 against Seattle wasn’t the best, but again, he hauled in all but one of the targets he saw. Josh Rosen and Kirk are building a good relationship, which is slowly diminishing Larry Fitzgerald’s value. These two rookies could become the next great tandem in Arizona.

Bryant caught all three of his targets on Sunday for 91 yards. Last week he caught three of seven targets for 51 yards. What I'm saying is Bryant has been getting open and getting targets, and he has been pretty productive with them. That's what you want in a bench stash or a WR3. Bryant out-targeted Amari Cooper on Sunday as well, 3-1. That could have been due to Bryant's more favorable cornerback matchup, but he is usually fourth on the Raiders in targets. Owned in just 3 percent of ESPN leagues, I’m looking to stash him.

With T.Y. Hilton having to miss most of Week 4 and all of Week 5, Rogers has seen 11 targets in consecutive weeks. Andrew Luck has gained trust with him this season, and Rogers has returned WR2 upside in PPR formats. I don't see much immediate regression coming, especially since Hilton, currently nursing chest and hamstring injuries, doesn't seem like a good bet to suit up in Week 6. Rogers is currently owned in about 8 percent of ESPN leagues.

Other Name to Watch:

Samuel is back from his health issues and saw more targets on Sunday than Torrey Smith, 4-1. I would keep an eye on the Ohio State product. He could become the No. 2 wideout for Cam Newton.