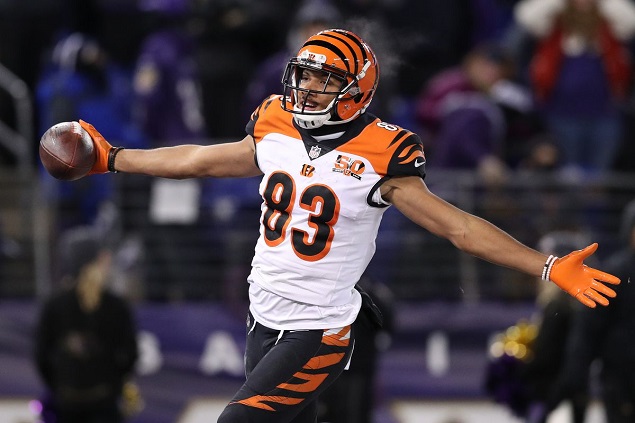 old adage that serves me well in fantasy football is: "Believe none of what you hear and only half of what you see." People sometimes tell you things that are not true and sometimes show you things to distract you from seeing the real picture. NFL coaches and players do this all the time.

For example, whom did you think would benefit the most when Seahawks RB Chris Carson was a surprise inactive last week? While many were under the impression that it would be Rashaad Penny given his placement on the depth chart, what we actually saw Sunday was Mike Davis out-touching him 25-9 and outgaining him 124-49. Fantasy owners were blindsided by this. Penny was the highly touted first-round rookie while Davis had touched the ball just five times coming into Week 4. But again, believe none of what you hear and only half of what you see.

If you’re looking for a tiebreaker between who to start, Vegas can provide some hints. There are six games this week that are currently projected to have more than 50 total points. Colts-Patriots, 51.5; Falcons-Steelers, 57; Packers-Lions, 51; Raiders-Chargers, 53.5; Rams-Seahawks, 51; Redskins-Saints, 52.5. High projected point totals can be a sign of fantasy production. Note that four of the five games in Week 4 that were projected to reach at least 50 points did so. Three of four such projected games in Week 3 came through as well.

WR Tyler Boyd looks really involved in the Bengals' offense and is producing as such for fantasy football managers. He made a ton of key third- and fourth-down receptions to keep drives alive in Week 4, especially after TE Tyler Eifert went out. Boyd should be a reliable WR2 with upside going forward. He has the talent and opportunity in a high-octane offense to be a week-winning choice this year.

The reason why Eifert left that Week 4 game was suffered a gruesome right ankle injury that will keep him out for the rest of the season. Eifert was putting together a solid campaign before the injury and will really be missed. Your fantasy benefactor here is the above mentioned Boyd.

Buccaneers TE O.J. Howard has a sprained MCL and will be out for 2-4 weeks. Cameron Brate slides right in and should be a favorite target of reinstalled starting QB Jameis Winston once the Bucs return from their bye.

Seahawks TE Will Dissly was carted off the field Sunday due to a season-ending patellar tendon. He was actually a decent contributor to the offense, but Nick Vannett should step right in and be given every opportunity to contribute. With the tight end landscape looking very barren and the bye weeks upon us, Vannett may be worth stashing.

Texans WR Will Fuller missed the second half of Sunday's game due to a hamstring injury. Despite his extended history with this particular injury, early reports have him on track to play in Week 5 versus the Cowboys. Still, fantasy owners shouldn't overlook Keke Coutee. The fourth-round rookie made his debut in Week 4 after dealing with his own hamstring injury and promptly saw 15 targets. He caught 11 of them for 109 yards. He looked like the clear second option in the Texans' surging passing game. Slot Coutee in as a solid WR2 with explosive weeks definitely possible whenever Fuller is sidelined.

Week 5 sends two teams on bye: Chicago and Tampa Bay. As such, Allen Robinson, Jordan Howard, Trey Burton, Tarik Cohen cannot be in your lineups. thing goes for Mike Evans, DeSean Jackson, Cameron Brate, or Jameis Winston. As usual, prepare accordingly. It is recommended that you prepare for bye weeks in advance with waiver wire pickups!