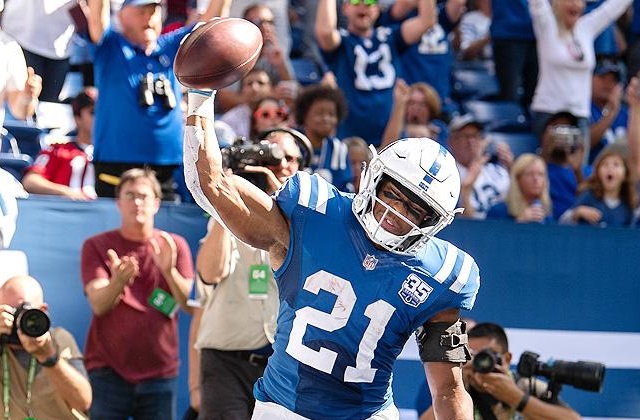 are my top waiver wire adds following Week 4. Some of these players, I believe, will have a nice role going forward while others may just be a bench stash. Let me know if you add any of these players.

Hines has been the pass-catching back for Andrew Luck of late and sits third on the team with 26 targets. On Sunday, he tied wideout Chester Rogers with a team-high 11 looks. With Luck’s arm not fully back to what it once was, this offense has taken to a dink-and-dunk approach. That has Hines' rookie year off to a hot start; he has compiled a 22-119-2 stat line as a receiver and an 18-54-1 line on the ground. This Indy team has zero run game thus far. With Hines sitting at 15.5 percent ownership in ESPN leagues, he is definitely someone I’m targeting this week on waivers.

Leonard Fournette is out again with a hamstring issue. Head coach Doug Marrone said Monday that he doesn’t know how long Fournette will be out, but his lead back is still feeling discomfort in the hamstring area after he missed Weeks 2 and 3 due to the same ailment. In steps Yeldon, who has been carrying the load fairly well, rushing 49 times for 205 yards and one TD while adding 14 catches for 125 yards and two receiving TDs. Yeldon is still available in more than 50 percent of ESPN leagues, but that ownership rate should be at 80 or greater come Wednesday. If you're a Fournette owner or looking for RB options, I would most definitely put a claim in for him.

Coutee has been the talk of Fantasy Twitter since he was drafted. In college at Texas Tech, he was highly effective, not just on offense but also special teams. He missed the first three weeks and all of the with a hamstring issue, but he was cleared last week and got the start in the slot Sunday versus the Colts. He absorbed 15 targets and caught 11 balls, both of which were team highs in Week 4. It probably helped that Will Fuller exited the second half with a hamstring issue, clearing the way for more targets to go to Coutee. With Fuller sidelined for an unknown amount of time, I'm jumping on Coutee and his absurdly low ownership percentage in ESPN leagues.

Gabriel’s numbers before this past week may not look outstanding, but he is currently second in targets on the Bears with 29, behind only Allen Robinson, who has 32. On Sunday, Gabriel caught seven balls for 104 yards and two TDs He also tallied a 10-yard rush. Gabriel has been Mitchell Trubisky’s go-to guy lately. While his Week 4 box score could be a fluke -- Trubisky isn't going to throw five first-half touchdowns every week -- but I'm grabbing some shares of Gabriel this week, who is owned in just 6.6 percent of ESPN leagues.

The Jaguars' offense can be a mess from week to week, but outside of Keelan Cole, their most consistent wideout has been Westbrook. He was targeted a team-high 13 times Sunday, leading to a 9-130-0 stat line. If you are looking for a WR4 or bye-week fill-in, look at the widely available Westbrook. I assume his ownership percentage will jump from 12 into the 30s by Wednesday.

McDonald has now had decent back-to-back performances and out-targeted Jesse James 10-2 in those two games. McDonald didn't break a 100 yards or score a TD he did in Week 3, but he did catch every ball thrown his way and racked up 62 yards Sunday. Ben Roethlisberger has become comfortable with McDonald more than I initially expected, so now is the time to drop James and grab McDonald, who has a 31.3 ownership rate in ESPN leagues.

OTHER NAMES TO WATCH:

Chubb had a great day on Sunday, taking his three carries for 105 yards and two TDs. Head coach Hue Jackson said Monday that “[Carlos Hyde] is playing well, but this guy (Chubb) is scoring touchdowns from a long ways away.” So look for Chubb to get more work going forward Chubb is owned in only 15.6 percent of ESPN leagues right now.

Gore saw almost all of the work in the Dolphins' backfield this weekend, out-touching Kenyan Drake 13-4, which was weird as Miami was down a bunch. However, the workload split is pretty even for the season. Look to grab Gore as he's just 8.7 percent owned. He may not be the hottest pickup, but he's reliable when he gets touches.

Pascal has become a name to watch in Indy after he saw 10 targets this past weekend. He turned six of those targets into 56 yards and a score. Guess what? He's owned in no ESPN leagues. Yep, 0.0 percent ownership. I may stash him this week or just wait and see what happens next week.

Swaim has been Dak Prescott's security blanket recently as he has seen a team-high 12 targets over the past two weeks. If you are looking for a suitable backup TE for your bench, I’d give Swaim a try.