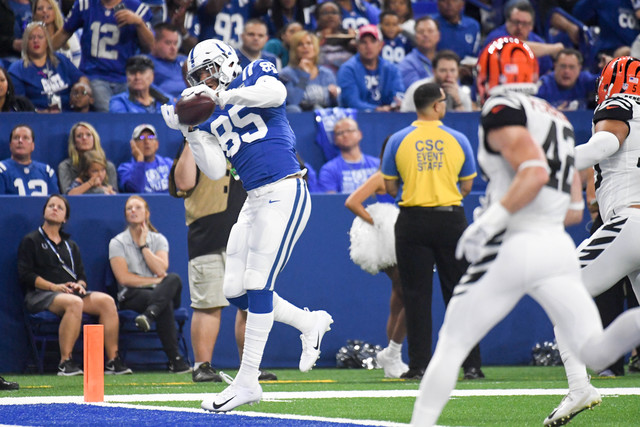 This week, I not only give you the top waiver adds, I will also throw in a few players to watch.

With Leonard Fournette out on Sunday, Grant formed a committee with T.J. Yeldon and out-targeted him, 7-5. Grant hauled in six of those targets for 56 yards and added four rushes for 13 yards. Before Fournette went down, head coach Doug Marrone said he wanted to get Grant more involved. Although he wasn't anything special as a flex play in Week 2, he could see more opportunities even when Fournette returns to the lineup.

I would treat Grant as an RB4/flex going forward. He could become the Jags' pass-catching back behind Fournette. He is owned in only 1.7 percent of ESPN leagues.

James has had two decent weeks now and currently sits as fantasy's No. 2 TE. Yet, he is owned in only 3.2 percent of ESPN leagues. He had himself a banner day on Sunday, catching all five of his targets for 138 yards and a score. That built upon his 60-yard outing in Week 1. Everyone has been waiting for the Vance McDonald breakout; I just don't think it's going to happen. James has been a reliable target for Ben Roethlisberger for the past couple of seasons and with Antonio Brown nursing a calf injury, James could be in line for even more targets going forward. He is easily worth streaming for now.

Ebron has taken to his change of scenery quite well, catching a TD in each of his first two games as a Colt. Ebron is currently TE9 on the season, which is largely due to him catching all but two of his nine targets thus far. Jack Doyle had more catches and yards in Week 1, but I think Ebron is the Indy tight end that fantasy owners should prefer. Andrew Luck has locked on to him in the red zone, which is a great thing for someone of Ebron’s stature.

Ebron is currently owned in 35.6 percent of ESPN leagues, a number that more than doubled from Week 1 to Week 2. His ownership should surpass 50 percent this week. Make sure you get on the wire and grab him.

Following Josh Gordon's dismissal in Cleveland, Callaway has become someone to monitor. On Sunday, he caught three of four targets for 81 yards and a touchdown. He added two rushes for 7 yards, which shows that offensive coordinator Todd Haley is finding different ways to use the rookie in space. Callaway is currently owned in just 3.7 percent of ESPN leagues, but following his Week 2 showing, that number should take a sizeable jump.

Callaway was a first-round talent who fell to the fourth round in this year's draft due to off-the-field issues. Those issues showed up during training camp when he got pulled over and cited for marijuana possession. But that shouldn't affect his playing status until next year. Now that Gordon is gone, expect Callaway's rapport with QB Tyrod Taylor to grow.

OTHER NAMES TO WATCH

Boyd looked like Andy Dalton's No. 2 target behind A.J. Green on Thursday. He could be in line for a good target share.