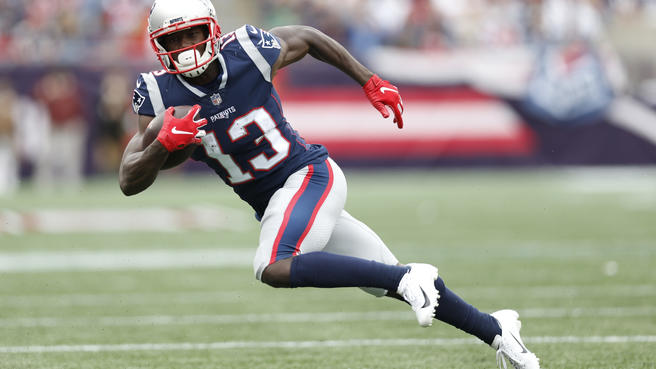 With the season-ending injury to Delanie Walker, the Titans are in need of another TE option for Marcus Mariota. Thank goodness they have one on the roster. Smith is a great asset. He came in last year and flashed early but then drifted away due to Walker dominating the snaps.

Smith was a decent college producer when he was healthy. His SPARQ score was just outside of the top five of all tight ends in the 2017 draft. Smith will take over the starting role and should never look back. Make sure you grab him if you’re a Walker owner or if you’re worried about Greg Olsen's foot injury. Jonnu is owned in just 0.2 percent of ESPN leagues, so he should be available wherever you play.

Maybe it was the Saints being behind or just the fact that Ginn has been a great target for Drew Brees in New Orleans, but the speedster caught five of six targets and posted a 5-68-1 line on Sunday. He chipped in a 5-yard rush as well. Last year, Ginn caught 75.7 percent of his targets, I drafted him toward the backend of my drafts, but currently in ESPN leagues, he is owned in only 17.1 percent of leagues.

I don’t think Ginn will lose work going forward. Brees trusts him and knows where he will be. Ginn has found a late-career push and it could greatly benefit your team this year.

Someone needed to replace Brandin Cooks in New England this year. Dorsett is pretty much a Cooks clone with better route running. Dorsett caught all seven of his targets in Week 1 for 66 yards and a touchdown, which should show Tom Brady that he is reliable and can produce when needed.

I have been high on Dorsett for a while now. If you follow me on Twitter, you would know that. I can’t understand why he is owned in only 4.6 percent of ESPN leagues. That is crazy when he is one of the top four options on the league's best passing offense. Go out, pick him up, be happy.

Lindsay is one good football player, which is why I couldn’t understand how he didn’t get drafted or an invite to the combine. Lindsay was productive during his college career at Colorado; he averaged more than 1,300 rushing yards and scored 32 total touchdowns over his final two seasons there.

You must be wary of the Broncos' full-fledged backfield committee -- Royce Freeman played 29 snaps, three more than Lindsay, and Devontae Booker wasn’t far behind with 19 snaps. I would add Lindsay as Freeman insurance or just as a flex option going forward. Lindsay is currently owned in only 1.9 percent in ESPN leagues. I actually didn't expect that number to even that high.

Here is another tight end you could pick up as an injury replacement. Dissly came out of nowhere this weekend, especially since everyone had been hyping Nick Vannett as the TE to watch in Seattle. Russell Wilson has always had a dependable tight end, and it looks like he has settled on Dissly to be that guy.

Dissly wasn’t anything special coming out of college; he caught just 25 passes during his entire career at Washington. But he shined in camp, and head coach Pete Carroll didn’t show much of him during the preseason. Similarly, he kept Wilson under wraps leading into his rookie year. Dissly produced 105 yards and a score on five targets Sunday and should continue to have a significant role for as long as Ed Dickson is sidelined with a quadriceps injury.