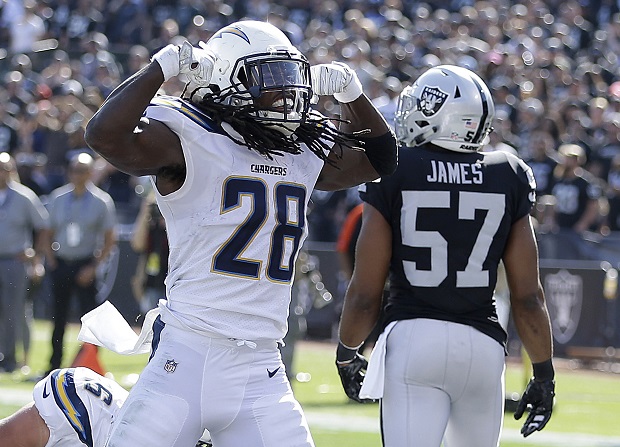 I wanted to take just a couple of minutes to express some opinions on three high-profile players who have a weird consensus ranking, according to FantasyPros, in the early going. Fantasy owners will be betting on these players to carry them to championships this fall. Whether or not you play fantasy football, you can still scratch that betting urge with the help of these betting sites.

When you're only dealing with players who will be taken in the first 4-5 rounds, any complaints over rankings are going to come off somewhat as nit-picking. With that acknowledged, it feels like Gordon is getting some early disrespect. No, he doesn't have a great yards-per-carry average. What he does have is 24 touchdowns over the past two seasons, youth at just 25 years old and clear dual-threat ability; he caught 58 passes last year. He was fantasy's No. 6 overall player in 2017. And yet, he's falling into the second round? He's being ranked, on average, behind Kareem Hunt, who may have to share work with Spencer Ware, and Leonard Fournette, a walking injury concern? That's a steal and an oversight, respectively.

In a PPR league, I could understand this ranking. But I'm judging this through a standard-league lens. And are we sure that McKinnon is really ready to be a top-15 fantasy running back? His highest ranking through four seasons was his RB24 finish in 2017. He's got new life and a new role in San Francisco, but I'm very skeptical toward any notion that McKinnon is the next Devonta Freeman or Alvin Kamara. He's an outstanding receiver, but he leaves a lot to be desired as a runner. I think that will lead to much disappointment among those who spend a second- or third-round pick on him in standard leagues.

The early consensus states that Penny, as RB21, will be a low-end but worthwhile RB2 in 12-team leagues this season. It's not a lofty standing, but for even that to occur, so much must go right for the rookie. He'll need Seattle's offensive line to be something other than terrible, which it was last year when it was the second-worst run-blocking unit in the NFL, per Football Outsiders. Penny will also need to stay on the field for more than the early downs, which may be a tall order for a player as raw as Penny in pass protection. And the San Diego State product will have to fend off backfield mates Chris Carson, C.J. Prosise, Mike Davis, etc. for touches. That's a ton of "ifs" surrounding a supposed near-top-20 running back. Penny is not worth a fourth-round pick right now.

FantasyPros consensus rankings compiled on May 6.