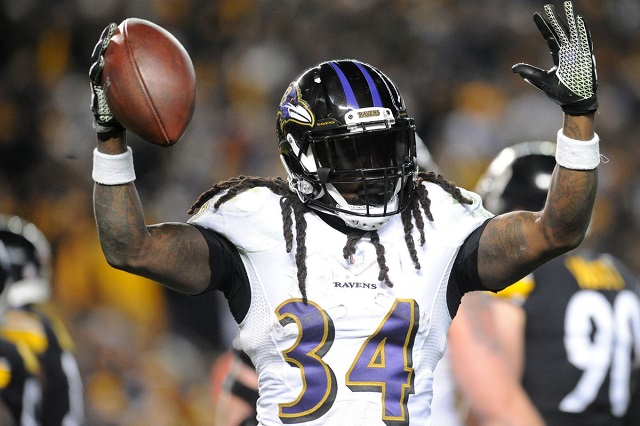 Collins was a surprising breakout hit in 2017, gaining 973 yards and averaging 4.6 yards per carry in 15 games. Still, with the rest of the depth chart consisting of Buck Allen, who is entering a contract year, and Kenneth Dixon, who missed all of last season due to a knee injury, there was an expectation that the Ravens would bring some more competition aboard.

Nope. That depth chart didn't move an inch following the draft, meaning that Collins is the clear-cut leader of this backfield heading to this summer. He will probably still lose a good amount of passing-down work to Allen and/or Dixon, who are much more adept at receiving. But he looks like a strong RB2 for standard fantasy leagues. Collins was fantasy's No. 16 RB last year, but he ranked eighth at the position from Weeks 8-17.

Oddly, the Texans didn't address their backfield either. Miller is at the head of the table but averaged just 3.7 yards per carry last season and has never proven that he can be a workhorse over a full season. D'Onta Foreman tore an Achilles tendon in November while Tyler Ervin ruptured a patellar tendon in October. Alfred Blue is about as mediocre as it gets among NFL running backs.

So, why is Miller on this list? Well, assuming Houston doesn't cut him for the cap savings this summer, there is no doubt that he will be the Texans' top RB, at least for the first couple of months. Foreman could be the long-term solution, but no one can properly assess what he'll look like on the field this year after suffering such a major lower-body injury. Ervin is even more of a question mark. Will the Texans consider fifth-string RB Troymaine Pope? There is just A TON of uncertainty behind Miller. Since he is coming off a couple of so-so campaigns, I'd imagine many fantasy owners won't be very high on him even if they are also aware of the morass on the Houston depth chart. So don't look now, but Miller, a player who should surpass 250 touches this fall and was a top-16 fantasy back in all formats in 2017, could come with a pretty tasty draft discount.

The Panthers released Jonathan Stewart in February, so who will pick up the work he left behind? Perhaps Cameron Artis-Payne. He profiles as the "big back" on this roster now. But how about the Panthers give those extra carries to McCaffrey, who carried the ball just 117 times last year? A pass-catching dynamo, McCaffrey averaged just 3.7 yards per carry during his rookie year, but it was really a tale of two halves because McCaffrey averaged 4.68 yards per tote from Weeks 9-17. He got more handoffs in the latter half of the year and showed an improved feel for being a running back at the NFL level to go with them. He will continue to be involved in the passing game frequently, but the Panthers, by doing nothing with their RB position during the draft, have sent out a signal that they plan to lean on McCaffrey significantly more in 2018. He can easily be a top-10 RB in all formats.

I wrote earlier this week that I am not a fan of the Colts' RB scenario. That is a mess at the moment. However, whoever gets the first crack at the starting gig could end up being a value pick in fantasy leagues. For one, the expectation is that Andrew Luck will be healthy (finally) and ready to go for Week 1. I know we can't just assume that, but let's pencil Luck in for Week 1, OK. It's very noteworthy that the Colts spent two of their first three draft picks, all of them in the top 40, on offensive guards. Indy has long sported one of the worst O-lines in the league and was especially bad at run-blocking last year. But with that line's rebuilt interior and the scheduled return of Luck, the Colts' top running back, whether that's Marlon Mack or Robert Turbin or Jordan Wilkins or Nyheim Hines, could be a fantasy find.