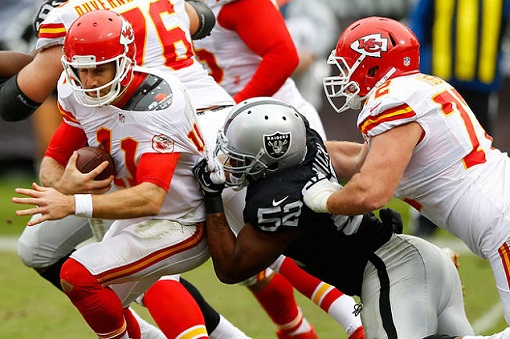 Despite the win, Chiefs QB Alex Smith crashed and burned during Week 14 against the Oakland Raiders. It was a pitiful performance against a defense that allows the fifth-most fantasy points to opposing quarterbacks. Smith threw for 268 yards, an interception and no touchdowns against that patchwork pass defense. Week 15 has nightmare written all over for Smith at Arrowhead Stadium as a rugged Chargers defense rolls into town with an eye on the AFC West lead. The Chargers have been shutting down opposing QBs all season long, and Smith will likely spend a large chunk of his Saturday afternoon on his back.

The San Francisco 49ers shut down Texans RB Lamar Miller last week, limiting him to 17 carries for a grand total of 53 yards. This week, the Texans travel to Jacksonville for a terrible matchup against a brutally tough Jaguars defense. The Texans' backup QB is out with an injury, leaving third-stringer T.J. Yates to face a top-ranked pass defense. Playing any Texans player this week is a recipe for fantasy disaster with the possible exception of DeAndre Hopkins. Look for the Jags' defense to stifle Miller and anybody else wearing a Texans uniform.

Lions RB Ameer Abdullah is set to return to the Lions' lineup this week for a Saturday matchup at home against the visiting Chicago Bears, but he may not have his starting job any longer. Theo Riddick may have taken over that gig after torching Tampa Bay for a pair of touchdowns and a boatload of fantasy points last week. The situation has not been resolved yet, but even if Abdullah gets the start, a divisional matchup against a pretty good Bears run defense caps any kind of upside he has for Week 15.