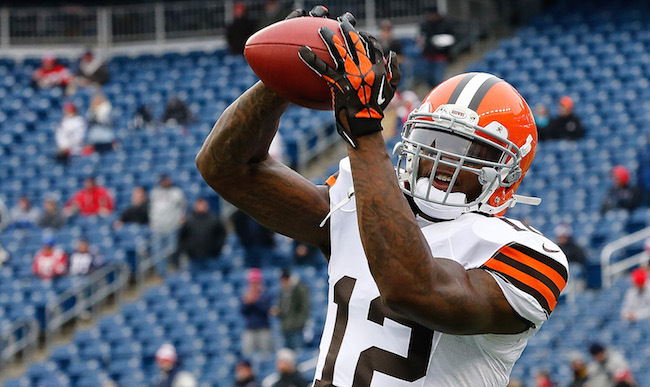 This is one of those choices that could completely backfire, but I firmly believe that fantasy owners are chasing the Fool-Aid if they dare to shove Browns WR Josh Gordon into their fantasy lineup. Gordon hasn’t taken a snap in THREE YEARS. He saw his last NFL regular season action against the Panthers in December 2014. Not only do I doubt Gordon’s miraculous return to football, his quarterback situation is a disaster too. DeShone Kizer has thrown seven picks against just two touchdowns in his last seven games and has topped the 200-yard passing mark only twice during that span. There is no denying that Gordon has otherworldly talent, but with his troubled past, his best days may be in the rearview mirror. Chase the Fool-Aid if you must; just make sure you are primed for disappointment.

Lions WR Golden Tate has been one the top boom-or-bust fantasy players of the 2017 season. In PPR leagues, he has scored more than 18 fantasy points five times while putting up five games with single-digit clunkers. Unfortunately, he’s in one his mini-slumps right now and a road matchup against the Ravens in chilly Baltimore is NOT the cure. Tate posts his best games in domes and seems to stumble when the mercury drops. It’s hard to bench a top-flight receiver such as Tate, but the overall matchup makes him a risky start.

Falcons RB Tevin Coleman has been on fire since Devonta Freeman went out with a concussion. But Freeman is back to practicing in full, so Coleman's production might suddenly grind to a halt. During his last three contests, Coleman averaged more than 20 touches per game and registered double-digit fantasy points each week. However, the return of Freeman coupled with a Week 13 matchup against the fearsome, top-ranked Minnesota run defense means the salad days for Coleman are over for now.