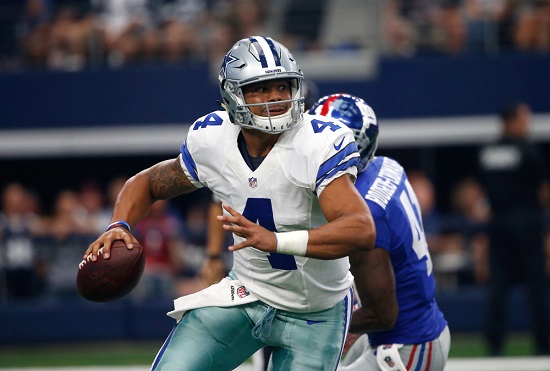 I have had zero luck predicting bad days for quarterbacks this season, so Cowboys quarterback Dak Prescott could be in for a big day since I am calling him a BUST for Week 12. I own Prescott in three leagues and his negative output in Week 11 against the Eagles pushed me to three losses. I have to think that a Thanksgiving Day tilt against the visiting Chargers is not going to help fantasy owners one little bit. The Chargers have been playing shutdown football against opposing quarterbacks lately, and Prescott has looked dazed and confused ever since the Cowboys lost running back Ezekiel Elliott to a six-game suspension. Prescott is still reeling from his beatdown by Philadelphia and will likely get his head handed to him by the Bolts.

Fantasy owners did not know it at the time, but once Bucs QB Jameis Winston went down with an injury, tight end Cameron Brate became pretty much useless. Backup quarterback Ryan Fitzpatrick has shown no interest in throwing to Brate, so there is no reason to put him into your fantasy lineup until Winston returns. Brate has recorded only one catch in three consecutive games, and rookie tight end O.J. Howard hasn’t been much better aside from a touchdown last week.

Lions RB Ameer Abdullah has a NASTY Thanksgiving Day matchup at home against the Minnesota Vikings. Somehow, Abdullah has scored a touchdown in three straight games, but he has rushed a total of 43 times for just 122 yards during his streak. That's a dismal average of 2.8 yards per carry -- OUCH! Don’t expect Abdullah to find the end zone on Turkey Day against a ferocious Minnesota run defense.

Never miss ASL’s latest fantasy sports news. Send us an email at
This email address is being protected from spambots. You need JavaScript enabled to view it. and list the sports you are interested in (NFL, NBA, MLB, NHL, EPL) to start receiving ASL’s newsletter.