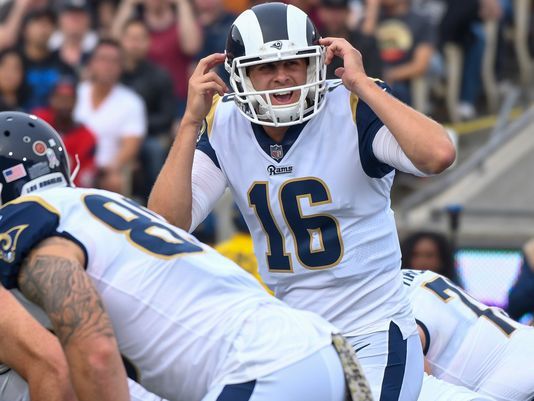 This is what happens when two top teams meet: Someone eventually starts giving up big plays, which leads to a win for the better defense. The Vikings were that team with the better defense Sunday. Adam Thielen got behind the Rams' defense after running a 5-yard curl route and took it 65 yards for a score, finishing his day with six receptions for 123 yards and that TD. Latavius Murray had the hot hand yet again, rushing for 95 yards and two touchdowns on 15 rushes. Jerick McKinnon tied for second on the team with seven targets, but his five receptions went for just 12 yards. He rushed 14 times for 48 yards.

Jared Goff had a decent day, but his receivers just could not find the end zone. The only Los Angeles player to find the end zone was Todd Gurley, who gained 56 yards on 18 touches. Robert Woods was worth using yet again as he hauled in eight of 11 targets for 81 yards. Sammy Watkins was covered for most the day by Xavier Rhodes, leading to a three-catch, 36-yard day by the deep-threat wideout.

Takeaways: Thielen is a top-10 WR going forward. Case Keenum will continue to be Minnesota's starting quarterback; he’s playing too well. Murray and McKinnon are worth using only as a low-end RB2 or a flex for as long as they are splitting carries evenly.

Woods still brought in decent WR2 numbers, but he will now miss a few weeks due to a shoulder injury. Look for Watkins to get more targets while Cooper Kupp might become a WR2. He was Goff’s second-most targeted receiver in Week 11.

Tom Savage made some beautiful throws and some awful throws on Sunday. One throw was a great end-zone strike to DeAndre Hopkins for 28 yards. Hopkins would be targeted nine times on the day and turned his four grabs into 76 yards and a score. D’Onta Foreman would go on to score twice in the fourth quarter but tore his Achilles on the latter TD run. Bruce Ellington is someone to watch as the fantasy playoffs approach. As long as Will Fuller is out with a rib injury, Ellington will be getting his fair share of targets.

Well, Bruce Arians may have been right to a point last week when he said Blaine Gabbert gets a bad rap because “he was on really shi**y teams." Gabbert was having a great game till he threw picks on back-to-back series, which helped the Texans put the game away. Larry Fitzgerald put on a clinic, catching all but one of his 10 targets for 91 yards and score. The Cardinals still can’t get a running game going -- Adrian Peterson rushed 14 times for only 26 yards and caught one of his two targets for 9 yards.

Takeaways: Lamar Miller will get even more work going forward with Foreman out, leading to RB2 value. In three games without Deshaun Watson, Hopkins has been a high-end WR2.

With Arizona’s upcoming schedule -- other than Weeks 14 and 16 when they face the Titans and Giants, respectively -- I can’t see any Cardinal repeating their performance from this past Sunday. They won’t be useable this week against the Jaguars. Ricky Seals-Jones may get some attention from Gabbert, but I’m rostering him only in dynasty leagues.

Ryan Fitzpatrick has won two games in a row at the helm. Fitz threw for 275 yards and two touchdowns. Jameis Winston will reportedly miss at least one more game. I was high on Cameron Brate going into Week 11, but that did not pan out in my favor. He finished his day with one catch for 12 yards. Instead, O.J. Howard was the TE that got the attention this week. Mike Evans was targeted 10 times and gained 92 yards despite catching just five passes.

Jay Cutler's day included three interceptions, one touchdown and one concussion. Matt Moore helped bring the Dolphins back in the second half and would start in Week 12 if Cutler can't clear the concussion protocol. Jarvis Landry is a target monster in this offense. Eleven targets went his way and he came away with a 6-95-1 line. Damien Williams led Miami's ground game with 78 yards on 10 carries. However, 69 of those yards came on one play. He also took his lone target for 24 yards.

Takeaways: With Moore at the helm, Kenny Stills' floor is higher than DeVante Parker’s. Stills had one catch before Moore came in; he had six after Moore entered. In total, he racked up 180 yards and a score on seven catches. If Cutler can’t go this week, Stills will be a streaming option.

Brate may not have value with Winston out right now as Fitz may just like throwing to his wide receivers more. Last week, Howard had zero targets, so don’t get seduced by his 3-52-1 line. Rookie wideout Chris Godwin could be a sneaky streaming play in Week 12.

Carson Wentz didn’t have a spectacular day, but he did add two more TDs to his total. The first TD of this game came on a run by Kenjon Barner that helped absolutely no one. Alshon Jeffery is riding a three-game TD streak now and should be a WR2 this week against his old team in Chicago. Also, look for tight end Zach Ertz to get back to his productive ways versus the Bears.

Oh, how Jerry Jones is having a bad year. But Dak Prescott is the one feeling the pain, having been sacked 12 times in the last two weeks. With Tyron Smith expected to come back this week, it will get better. But Dak may not be worth starting in fantasy come Thursday if Smith doesn’t play. The Chargers may feast on that broken O-line. Alfred Morris had Dallas' run game going with 91 yards on 17 rushes.

What a good game, The Bears' defense is super underrated. If they could have just held it together after the half, they would have beaten the Lions. No thanks to Connor Barth either. Like, wow ... how do you kick it that far wide? The Bears cut Barth on Monday. Anyway, Jordan Howard is the only real fantasy asset on this team. Tarik Cohen got involved this week, but who knows how long that lasts? Keep an eye on second-round rookie Adam Shaheen. Dynasty owners know him, but Mitchell Trubisky likes his TEs.

Detroit didn’t look great in the first quarter of this game, letting pressure get to Matthew Stafford and forcing him to make bad decisions. The second quarter, however, was more in Stafford’s favor as he completed TD passes to Marvin Jones and Ameer Abdullah. Jones is turning in a great season. On Sunday, he caught four of eight targets for 85 yards and a score. Jones has registered double-digit fantasy points in four of his last five games.