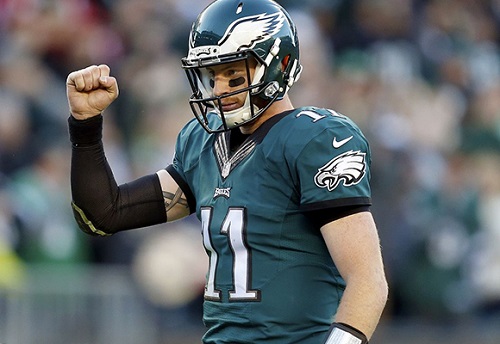 You must respect Von Miller, Aqib Talib, Chris Harris and that strong Denver defense. But this is too much respect. Wentz has averaged 25.95 DraftKings points over the past four weeks, the Broncos are traveling to Philly on a short week, and Wentz is carrying his cheapest price since Week 3. I focus on cash-game picks in this column, but considering the opponent, Wentz looks like a great tournament play. His price, which is lower than Matt Ryan's at Carolina or Jameis Winston's at New Orleans, makes him more than worth it. Considering that Denver has allowed the fifth-most fantasy points per game to tight ends, expect Wentz to find Zach Ertz over and over Sunday.

There are definitely some question marks surrounding Ellington this week. Is he fully healthy? He didn't play in Week 7 due to a quad injury, but although he is listed as questionable for Sunday's game, he had a bye week to rest up and practiced in limited fashion the week. How will he work with Drew Stanton? Carson Palmer was not playing like an elite quarterback, but it's a steep fall in quality from him to Stanton. Hopefully he flings a handful of passes into the flat to Ellington instead of having eyes for only Larry Fitzgerald. There are no questions about the matchup as the 49ers have allowed the second-most receptions and the most receiving yards to RBs. Even though there is no guarantee of success for anyone in this offense, Ellington's low price takes much of the risk out of this situation. He won't need to do much for him valuable. As a receiving-heavy back, he is made for DraftKings' PPR scoring.

I mean, where else is Cam Newton going to look now? This week's Kelvin Benjamin trade was completed partially in an effort to open up the team's running game. I have no doubt that Christian McCaffrey is going to see more targets now, but besides him and Funchess, I don't know whom else Newton trusts here. The rest of Carolina's active WR roster -- Curtis Samuel, Russell Shepard, Kaelin Clay -- has 18 receptions this year. It's not a stretch to say Funchess will see double-digit targets this week versus the Falcons after averaging about seven looks per game through the first eight weeks. He might see a good amount of cornerback Desmond Trufant this weekend, which isn't optimal, but Trufant did give up a couple of deep catches last week versus the Jets, so perhaps that matchup isn't as scary as it looks.

I also considered the Buccaneers' Cameron Brate versus the Saints as he costs $4,500 and has tallied double-digit points on DraftKings for six consecutive weeks. Instead, I'll save a few hundred bucks and pick the more obvious option, Davis. When Jordan Reed was inactive in Week 3 versus the Raiders, Davis stepped in and supplied five receptions for 58 yards and a touchdown. He should be productive once again, this week against the Seahawks, who have ceded notable box scores to tight ends Tyler Higbee and Evan Engram in two of their last three games.