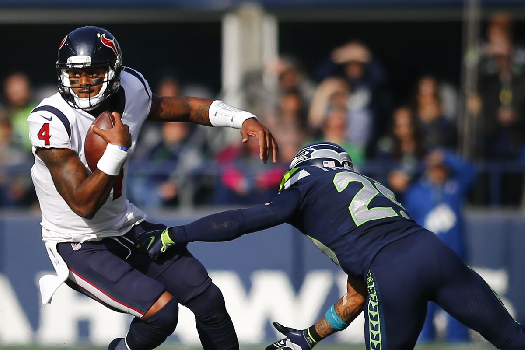 The Eagles started the game slowly, scoring only three points in the first quarter. Then in the second quarter, Carson Wentz hit Zach Ertz for a one-yard TD. Wentz finished the day with 211 yards, two touchdowns and an interception, scoring fewer than 20 fantasy points for the first time in three weeks. Alshon Jeffery scored in this game and also led the team in receiving with 62 yards on just two catches. Wendell Smallwood looks to be on the outside looking in as he touched the football just two times. Corey Clement and LeGarrette Blount got all of the work out of the backfield this week.

Editor's Note: The Eagles traded for running back Jay Ajayi on Tuesday morning, so there's little doubt that he is now Philadelphia's lead runner.

I said it last week: C.J. Beathard is not the answer to the 49ers' woes. Beathard threw for 167 yards, one TD and two picks. He tacked on 40 rushing yards. That whole narrative about Beathard and tight end George Kittle going off because they played college ball together didn’t work out. RB Matt Breida led the Niners in receiving with four catches for 39 yards and a TD. I know, I know, the 49ers are a fantasy wasteland ...

Takeaways: That’s called a teaser. The 49ers went out Monday night and traded for Jimmy Garoppolo. When Jimmy started in New England, he looked poised and competent. San Fran has a decent group of skill-position players, with Carlos Hyde and Pierre Garcon, just to name a couple. They all should see a boost in production and fantasy value with Garoppolo behind center.

With the Eagles, you are looking at Jeffery as a WR2, Ertz TE1, and Nelson Agholor as a must-start WR3. Mack Hollins is an intriguing add in 12-team or larger PPR leagues as he seems to be getting more and more involved. I also don’t believe any of the hype about Calvin Johnson coming out of retirement to go to the Eagles. I, for one, believe Matthew Stafford would stop that and be like “Yo, let’s go do this. I’m just missing you in the red zone.”

Holy moly!! What a game! Deshaun Watson is the real deal. Watson has grasped Houston's offense and made it his own. Combining DeAndre Hopkins and Will Fuller on the outsides and Lamar Miller up the middle, this offense is going to put up points and have high-scoring players for your fantasy team. Fuller and Hopkins have been putting up WR1 numbers each week since Watson has taken over. With opposing defenses having to account more for Watson and Co., I forsee Miller getting more done on the ground, giving him more value.

Russell Wilson did Russell Wilson things on Sunday and was fantasy's top quarterback this week. He threw for 452 yards, four scores and a pick, adding four rushes for 40 yards. News came out Sunday morning stating that the Seahawks were shopping tight end Jimmy Graham for a left tackle. Graham came up clutch in the red zone, scoring twice. Paul Richardson had the biggest day of any Seattle receiver, catching six of his seven targets for 105 yards and two TDs. Tyler Lockett piled up 121 yards on six receptions. However, none of the team's three running backs could get anything going. Eddie Lacy and Thomas Rawls each rushed six times while J.D McKissic handled the first RB snap but gained just 12 yards on five touches.

Takeaways: Houston's aforementioned skill players are all in must-start territory. Watson has surpassed being a matchup-based play. Hopkins is back to being a WR1, and Fuller is a WR2 with WR1 upside. Houston plays Indianapolis in Week 9, which should be a blowout.

Ben Roethlisberger had yet another down road game, but all of his major skill players managed to have great days. JuJu Smith-Schuster got his bike back last week and then caught seven of ten targets for 193 yards and a TD, making him the first player to tally four touchdowns in the NFL before turning 21. Antonio Brown had a decent PPR day, coming down with five balls for 70 yards. It could have been an even better day, but Brown got called for pass interference on a touchdown catch. Le’Veon Bell carried the rock 25 times for 76 yards and a score. He also caught two of three targets for 5 yards.

Matthew Stafford threw for 423 yards on Sunday, but his red-zone woes continued. As I stated before, I don’t see the Lions just giving away Megatron's rights without Stafford throwing a fit about how he needs him there. Marvin Jones tried to do his best Megatron impression, catching six of 11 targets for 128 yards. Golden Tate returned from injury to have a decent day, hauling in seven balls for 86 yards.

Takeaways: Lions wideout T.J. Jones is worth an add in some deeper leagues. He caught four passes for 88 yards. It’s only a matter of time before something goes in the Lions' favor in the red zone.

JuJu is a must add, I am #TeamJuJu. He’s a WR3 going forward and could become a WR2 if Martavis Bryant gets traded or released. Week 9 carries a bye for the Steelers. They will then play five of their last eight games at home.

Want to get an early start on Week 9 in fantasy football? Build your team in this $3 Pick'Em Contest on DraftKings.

Dak Prescott had his worse game of 2017, throwing for only 143 yards with no scores. Look for that to change next week. Also, you might want to grab as many shares of Darren McFadden as possible as Ezekiel Elliott’s six-game suspension was put back into effect Monday night.

I am sorry to anyone who followed my Terrelle Pryor offseason love and drafted him with high expectations. He is safe to drop in every type of league.

Rex Burkhead has leapfrogged Mike Gillislee in New England. Burkhead is worth a stash in some formats. Let’s hope New England gets its running back's roles ironed out during its Week 9 bye so we have a clearer picture going forward.

New England's defense was too much to handle for L.A. this weekend, holding Philip Rivers under 300 yards. Melvin Gordon had a great day, however, rushing for 132 yards and a TD.