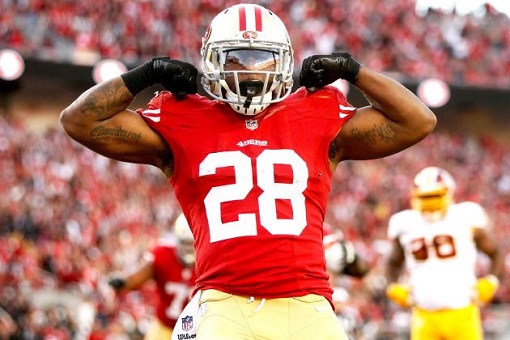 It seems like Taylor's job security is at risk every week. However, he should reaffirm his standing this weekend with a good outing against a Buccaneers defense that has allowed the third-most fantasy points per game to opposing QBs. Taylor has not been the same guy who finished last season as fantasy's No. 8 quarterback, but he has posted at least 17 fantasy points in each of his two home starts this year and could get wide receiver Jordan Matthews back into the fold this week. You know that Taylor is going to run as well, keeping his floor high. The Bucs haven't surrendered many rushing yards to quarterbacks, but when you face Mike Glennon, Case Keenum, Eli Manning, Tom Brady and Carson Palmer, you're not going to worry about a QB option run. Taylor will test Tampa Bay on the ground and through the air and should find enough success to make him worth his price.

Hyde averaged only 2.2 yards per carry last week, but the more encouraging number was that he outsnapped Matt Breida 56-17 on offense, quelling those rising concerns that a running back committee might be taking shape in San Fran. Also encouraging: Hyde scored a couple of times in Week 6 and has caught five passes twice in the past three weeks. The Cowboys have been gashed for at least 100 rushing yards by a running back in three of their past four games and have permitted an average of six catches per game to RBs. Hyde has regained control of the 49ers' backfield, is the go-to guy by the goal line, is a competent receiver and has a soft matchup in Week 7. And yet, his DraftKings price has fallen $300 from last week. Take advantage of that discount.

It's not a given that Shepard will play this Sunday, but considering that he practiced Wednesday and said he felt good afterward, I will assume that his injured ankle will be strong enough for him to suit up against the Seahawks. If that's the case, Shepard will immediately become the Giants' No. 1 wideout and should be peppered with targets. The Giants threw the ball only 19 times during their shocking victory in Denver last Sunday night, but you shouldn't expect another dominating performance to come versus Russell Wilson and Co. Obviously, beating Seattle's pass defense is not an easy task, but you can find gaps in their scheme over the middle of the field, and Shepard, as a slot receiver, should be able to get into those open spaces. I think he will see at least eight targets -- as long as the offensive line gives Eli Manning time to throw -- and his $5,100 price tag will prove to be much too low if he is that much involved.

Those early-season disappearing acts from Henry should be forgotten. He has posted at least 13 DraftKings points in each of the Chargers' past two games and has easily outsnapped Antonio Gates since Week 5. He should be considered a fantasy TE1 moving forward and might be fantasy's No. 1 TE this week against a Broncos defense that has permitted the sixth-most fantasy points to opposing tight ends. Giants TE Evan Engram, who is a young, athletic mismatch like Henry, gained 82 yards and a score while hauling in five of his seven targets versus the Broncos last week. That feels like a reasonable prediction for Henry this week, but at $4,200, DraftKings must be expecting much less. This is a big-time bargain.