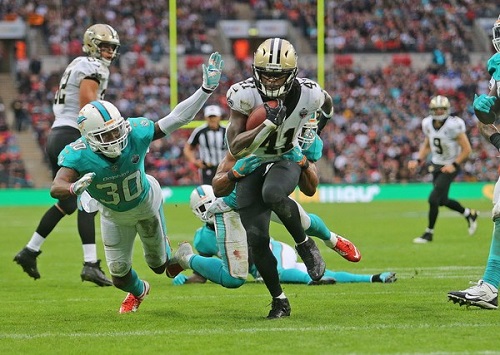 Talk about a punt play. I don't like McCown, and I understand why you wouldn't either, no matter the price. This may not be a game you want to watch if you roster McCown. But a home matchup against the New England Patriots has meant good things for the box score of opposing QBs. Jameis Winston didn't play very well against the Patriots last Thursday, but he still put up more than 20 fantasy points. You don't need McCown to score even that much to make him worth his price, which is cheaper than that of Jimmy Garoppolo. McCown will be able to give you what you need simply because the Jets have no real running backs to speak of with Matt Forte and Bilal Powell injured. Their backups, Elijah McGuire and Travaris Cadet, are better as receivers than actual runners. The Jets don't like to throw more than 30-35 times per game, but they probably won't have any other choice this Sunday given the state of their backfield and the likely inability of their defense to stop Tom Brady and friends.

Update: My outlook for McCown doesn't really change much even with

I almost put McGuire here, but advocating for two Jets in a single fantasy football column feels like a fool's errand. Then I saw Kamara, a player with the same price as McGuire. Mark Ingram ($4,400) is a bargain as well, but Kamara has much more upside in DraftKings' PPR scoring. He caught all 10 of his targets in Week 4, and you have to imagine that his role will increase now that this backfield is less crowded following this week's Adrian Peterson trade. The Lions have given up the fifth-most receptions per game to RBs this season. Six running backs have caught at least three passes in a game versus Detroit, and I would be surprised if Kamara came away with less than double that number on double-digit touches.

The picks get even cheaper with Louis, who has seen 17 targets over the past two weeks. Yes, the Browns have made a quarterback change, and while we don't know much about Kevin Hogan's rapport with Louis, they connected on three of five targets for 43 yards in a half last week. It won't be difficult for Hogan to be more competent than DeShone Kizer, who completed less than half of his throws in each of his last four games. So, I think the QB switch will work in Louis' favor, and you love his recent usage as well. The Texans' decent pass defense doesn't look nearly as fearsome without J.J. Watt and Whitney Mercilus, and the Browns will probably have to throw often to keep up with Deshaun Watson and the Texans' offense, which has topped 30 points in each of the past three weeks.

And we bottom out with Kittle at $3,400. I'm probably being seduced by one drive in one game from Kittle, but he did look great in the fourth quarter against the Colts. Brian Hoyer got five balls to him on one drive and targeted him nine times overall. Kittle wrapped up Week 5 with a 7-83-1 line. That could be a one-week outlier, but you know the 49ers aren't stuffed with great receiving targets, and the Redskins have allowed the third-most fantasy points to opposing tight ends. They have permitted at least 10 fantasy PPR points to a tight end in each of their four games this season (Zach Ertz, Gerald Everett, Jared Cook and Travis Kelce).