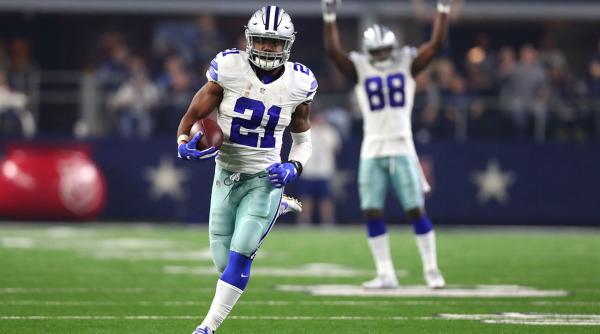 Elliott, an easy top-five fantasy selection this season, is currently being investigated by the NFL after he was accused of domestic violence by an ex-girlfriend in 2016. Ostensibly, he is facing a suspension. Will he actually be suspended? ESPN's Adam Schefter said Monday on SiriusXM Radio that he's not sure -- he's heard conflicting viewpoints from people all around the league. However, Schefter did add that if he was drafting his fantasy team today, he would be "hesitant" of spending such a high pick on Zeke. Good thing it's just the first week of July; not many leagues have gotten off the ground yet. But with training camps opening before the end of the month, drafts will pick up in earnest soon, and there's a good chance we still won't know what kind of discipline, if any, Elliott will face. This is just another reason why I abhor drafting so early in the summer. I know the die-hards are eager to get their teams assembled, but what good can actually come from drafting so early? If you can, wait until late August when the odds of having your team affected by a training camp injury are slim. The uncertainty surrounding Elliott's status is another reason to hold off.

Someone has got to be the No. 1 guy in this running game, at least in theory. ESPN.com's New England Patriots reporter Mike Reiss said this week that his pick to hold that title would be Gillislee. That's not exactly a hot take as many others have thought the same so far this summer; we ranked Gillislee the highest among all Pats backs. But you know the game here. One fumble could land Gillislee in the dog house. And with so many other options available -- James White, Dion Lewis, Rex Burkhead -- this is going to be perhaps the league's messiest RB committee. Even with a plurality of the touches, Gillislee is an RB3 at the moment. Considering the volatile history of Bill Belichick running backs and the sheer number of players who could steal work from the former Florida Gator, I wouldn't hold my breath waiting for Gillislee to retain steady RB2, starter-worthy value in 2017.

Breaking news: A quarterback likes the offense that he is obligated to lead.

“Honestly, I can say it’s definitely the most talent we’ve had with the receiving corps, bringing everyone back, having a second year together in the same offense,” Tannehill told the Miami Herald. “That’s going to be huge for us."

Tannehill went on to wax poetic on wide receiver DeVante Parker and tight end Julius Thomas. It's pretty standard fare for early July NFL articles. I am a fan of Parker and Thomas, relatively. I was pretty high on the latter in ASL's tight end rankings. Miami's offense does look enticing on paper with Parker, Thomas, plus a stellar RB1 in Jay Ajayi, PPR darling Jarvis Landry, a deep threat in Kenny Stills, etc. However, it's an offense still headed by Tannehill, who is coming off of a partially torn ACL and has seen his TD-to-INT ratio slide two years in a row. For as good as thinks this offense can be, is he capable of floating all boats here? Can this group realize its promise with him under center? It's the greatest question surrounding this offense in NFL and fantasy circles.