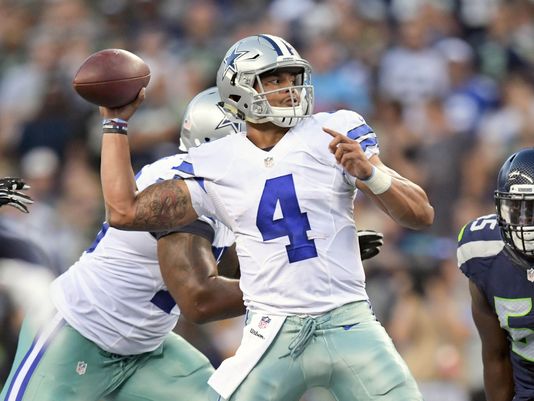 Fantasy Football: Week 9 Preferred Starts According To The Machine

The Machine from ASL can help you win your matchups every week, and here are four players The Machine says will also help you accomplish that task in Week 9.

What's all this fuss about Dak possibly losing his starting job to some Romo guy? The Cowboys haven't lost since Week 1, he has tallied multiple touchdowns in five straight games and has a 13:4 touchdown-to-turnover ratio overall. He is completing 65 percent of his passes and is a dual threat with his ability to run. This week, he should keep right on rolling against the Browns' weak opposition, which is allowing the fourth-most fantasy points to QBs. All but one signal caller has produced multiple touchdowns against Cleveland this season. Just hope that running back Ezekiel Elliott doesn't hog all of the fantasy goodness for himself. The Machine has Prescott projected to be this week's No. 6 fantasy quarterback in standard formats.

It's not too hasty to already be ranking Moncrief among the top 15 fantasy wideouts. That's where The Machine has him for this week -- 15. The Packers don't present a daunting matchup in what should be a shootout, and Moncrief's upside for Week 9 might rise if T.Y. Hilton can't play Sunday due to a hamstring injury. Moncrief returned last week after a five-game absence because of a broken shoulder and got right back into the swing of things with four catches (on nine targets) for 41 yards and a score. He also had a second, longer TD called back. Andrew Luck should be looking for him early and often in Lambeau Field.

This one's tricky since the Ravens look to be using a quartet of running backs right now -- West, Buck Allen, Kenneth Dixon and Lorenzo Taliaferro. Plus, West ran for just 10 yards on eight carries in his most recent game. However, one bad performance shouldn't result in him losing his lead gig. Even with that game, West is averaging a healthy 4.4 yards per carry and has been the Ravens' best backfield option by far this season, including when they still had Justin Forsett on the roster. The Steelers, meanwhile, have been getting shredded on the ground, highlighted by a 204-yard game by the Dolphins' Jay Ajayi a few weeks ago. In its past two games, Pittsburgh has permitted 331 rushing yards and four scores to lead running backs. Thus, it's no wonder why The Machine thinks West will bounce back in a significant way this week, ranking him as the No. 6 RB.

Let's double up on Ravens because the Steelers also allow the 10th-most fantasy points to tight ends. Again, in each of their past two games, they have allowed more than 100 yards to the position. Sure, one of those games came against Rob Gronkowski. But the other one versus the Dolphins saw MarQueis Gray accumulate 81 yards on his own. Pitta is a low-ceiling option, but the matchup and the fact that Gronk, Jordan Reed and Tyler Eifert are all on bye makes him worth deploying if you need a TE right now. He is the No. 13 tight end for Week 9, according to The Machine's projections.