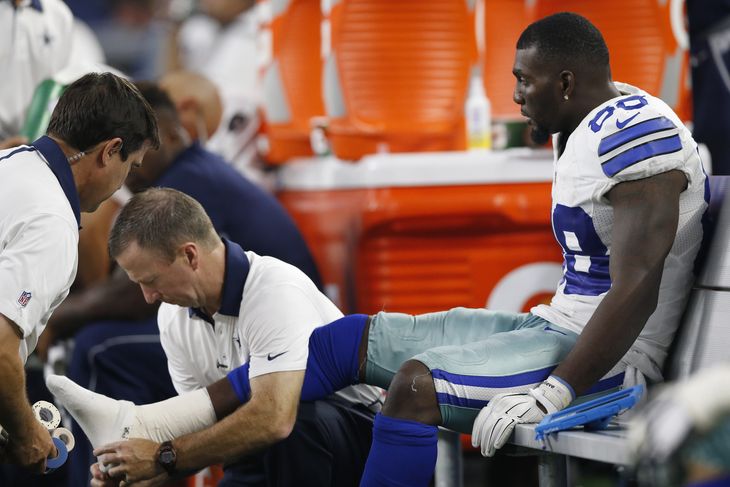 Dez Bryant (6) dominated sporting news this week after leaving the fourth quarter with a broken bone in his foot. Having to undergo surgery to repair the broken bone, Bryant is expected to miss anywhere between four to six weeks. With the number one WR on the Dallas roster out for the next couple of games, the Cowboys will have to work with Terrance Williams, Devin Street, Jason Witten and Cole Beasely in the receiving corps. The next six weeks are going to be tough for the Cowboys, with many high-caliber teams on the schedule. Look for updates on Bryant’s injury from Coach Jason Garrett for when he will be rotated into the lineup again.

T.Y. Hilton (21) left the third quarter of the Colts blowout loss to the Buffalo Bills with a knee injury. Diagnosed with a knee bruise from x-rays and an MRI, the starting WR will be out for an estimated “couple of weeks.” With no definitive time of return, Head Coach, Chuck Pagano, said that they are taking Hilton’s injury “day-by-day.” Hilton led the Colts in receiving for the game with seven catches and 88 yards. With Hilton out, expect Andre Johnson (58) to rotate into the lead role as receiver.

DeSean Jackson (46) left the first quarter of the Redskins game against the Miami Dolphins with a pulled hamstring. Jackson is expected to be out between three to four weeks with this hamstring injury. With Jackson out, the Redskins will likely focus on Pierre Garcon (60) and Jordan Reed (191) to be their primary receivers. The loss of Jackson is a huge blow to the already shaken up Redskin offense. Last season Jackson led the Redskins in receiving with 56 receptions, 1,169 yards, and 6 TDs.

Delanie Walker (76) left Sunday’s win against the Tampa Bay Buccaneers with a hand injury. However, he is expected to play against the Browns this coming Sunday. Walker caught 3 passes for 43 yards and 1 TD making him a solid player in the fantasy news.

There is no definitive date for the return of Julius Thomas (79). Out with a finger injury, the TE is continuing the recovery of surgery on his finger. The Pro Bowler’s absence in Sunday’s game against the Carolina Panthers was felt as the Jaguars fell 20-9. Though there is no exact timeline for the return of Thomas, the TE is listed as out for Sunday’s game against the Dolphins. In the meantime, Marcedes Lewis will take over the role of starting TE. Last season Lewis played in 8 games, catching 8 passes for 206 yards and 2 TDs.

Josh McCown (167) left the first quarter with a concussion against the Cleveland loss to the New York Jets. McCown threw 5 passes for 49 yards on the Browns opening drive. If McCown is cleared to play, he will start against the Tennessee Titans on Sunday. If he isn’t, then Johnny Manziel will step up to be the starting QB.

The Broncos have two star players facing a questionable playing status for Thursday’s game against the Chiefs. Demaryius Thomas (2) and C.J. Anderson (27) both experienced injuries during their game against the Ravens. Even though Thomas received an x-ray after the game, Head Coach Gary Kubiak stated that he should be expected to play in Week 2. Thomas caught 7 passes for 60 yards in the win against Baltimore.

C.J. Anderson suffered a rolled ankle and sprained toe during the Week 1 game. Kubiak also announced that Anderson should be expected to play on Thursday. However, fantasy owners should check before the game for an official announcement. Anderson had 12 carries for 29 yards.