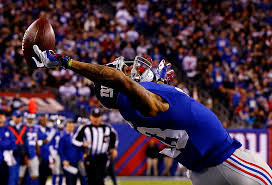 The obvious number one option here, Beckham stepped onto the scene, and took the sporting news and fantasy news worlds by storm. Even though he missed the first 4 games of the season, Beckham still had over 1,000 receiving yards with 12 touchdowns. Even with Victor Cruz expected to start week 1, Beckham will still receive be a favorite target for Eli Manning and should still dominate in fantasy.

Even though Evans has a rookie quarter back throwing him the ball, Evans was the number one receiving target in Tampa Bay's offense. He had a 1,000 receiving yard season to go with his 12 touchdowns this past season, and should only improve this season.

A huge sleeper for fantasy this season, Cooks is primed to breakout for 2015. New Orleans lost Jimmy Graham and Kenny Still, and Cooks is going to step in as the number one target for Drew Brees. The versatile player was receiving a lot of targets before he got injured, and with him being fully healthy, he will be a great mid to late round option in fantasy.

With a near 1,000 yard receiving year, Watkins has a lot of potential to breakout this season. Percy Harvin is also expected to receive a lot for targets this year too, but Buffalo didn't trade up for Watkins in last years draft for no reason, and should still be a viable option in 2015.

Matthews had a decent season next year, and with Jeremy Maclin gone, Matthews steps in as the number one receiver. Philadelphia signed DeMarco Murray and Ryan Mathews and they are expected to be a run-oriented team, but Matthews will still see a bunch of looks from whoever is at quarter back.

He didn't have a great rookie season, but Adams is more experienced with Green Bay's offense, and with Aaron Rodgers at quarterback, it's possible for Adams to be a decent fantasy option.

Landry had the most receptions and targets from Ryan Tannehill, but wasn't a great fantasy option last season. Miami also acquired DeVante Parker, Kenny Stills, and Greg Jennings this season, so it's going to be tough for Landry to make an impact, but he does have the most chemistry with Tannehill out of all the other receivers.

Latimer could be a sleeper for this year, as he barely produced anything last year, but he could become the number three target for Peyton Manning, with Julius Thomas and Wes Welker gone.

All of Jacksonville's second year receivers were inconsistent but Robinson performed the best towards the end of the season.

Lee was suppose to be Jacksonville's number one receiver, but injuries damaged his year, and other rookies from last season. He still has potential to break out.