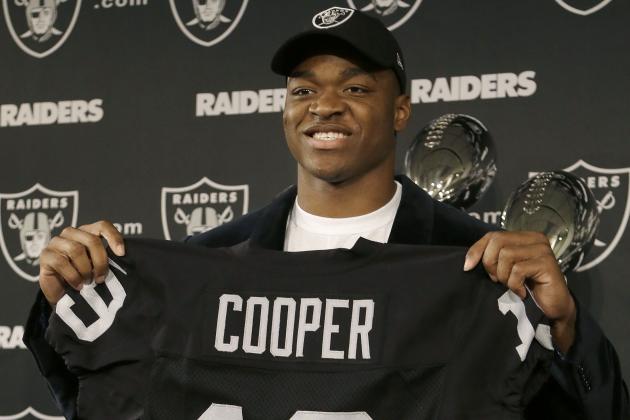 1. Amari Cooper, Oakland Raiders
Cooper has been receiving huge compliments from teammates and coaches and it's clear to see that he's going to step in and play right away.  For now he is the starting wide receiver across from Michael Crabtree and so far it doesn’t look like the former Alabama player is going to lose his starting job. With poor play from Oakland's wide receivers last season, Cooper will likely be one of Derek Carr's favorite targets, especially because he is much faster and can get more open on the field than Crabtree, and any other of the raiders wide receiver for that matter.

2. Kevin White, Chicago Bears
In WR news, White isn't the clear-cut starter yet, but it's expected for him to have a huge role in John Fox's offense. White is competing for the fourth wide receiver spot behind Alshon Jefferey, Eddie royal, and Marquess Wilson, however, White has great size and speed, and no other Bears receiver can offer that combination as good as White. With his 6 foot, 3 inch height, and 215 pound frame, White would be a tremendous red zone target for gun-slinger Jay Cutler, and could possibly score a lot of touchdowns. White would be a better option for a dynasty league as it's expected for him to be the number 2 option for Jay Cutler in 2 seasons, if not, the number one option.

3. DeVante Parker, Miami Dolphins
He's a risk if you draft him, but Parker is a talented wide receiver that will eventually be one of Ryan Tannehill's biggest weapons. Parker recently had surgery on his left foot and it will cause him to miss time during training camp, but it's expected that he will be ready by the first game of the season. This isn't the former Louisville Cardinal's first time getting surgery on his left foot, he underwent surgery on the same foot his last season in college, and missed the seven first games of the season. Even when Parker does eventually become fully healthy, he'll have some competition for playing with receivers like Greg Jennings, Kenny Stills, and Jarvis Landry currently leading the receiving corps. Nonetheless, Miami coaches have high expectations for Parker, and his talent will soon make him a huge contributor for their offense.

4. Nelson Agholor, Philadelphia Eagles
Agholor is a sleeper, that will be heavily relied on this season which means he could be in for a huge rookie season. He's been drawing raves from the team about his speed, crisp route-running and catching ability, and it seems he and Jordan Matthews will be the primary targets in head coach Chip Kelly's offense.

5. Breshad Perriman, Baltimore Ravens
Perriman's size, strength, and speed has never been a question but his catching issues have always been. Perriman dropped multiple passes frequently throughout practices this offseason, and is in danger of not starting if he can't get it fixed. Perriman has the physical attributes to produce big numbers, but he can't produce stats as a receiver, if he can't catch the ball.

Stay tuned to ASL's WR fantasy news for the most comprehensive updates!